A former public housing project in London gets a luxury upgrade

The Brutalist building was designed by Ern? Goldfinger, an architect who inspired authors, including Ian Fleming.

In the 1960s, Balfron Tower was built in the Poplar neighborhood in the East End of London to house the city's poor. Today, the building is being re-purposed as high-end housing for professionals. The project will take three years and cost a reported '40 million ($51.7 million). This fall, buyers were given their first glimpse of how the Brutalist landmark is being brought into the 21st century.

Prices start at '365,000 ($472,054) for a 450-square-foot, one-bedroom home. The most expensive, three-bedroom apartments are priced at about '800,000 ($1.03 million). Baerbel Schuett, development director at Londonewcastle, the firm doing the renovation, believes the homes will appeal to buyers with a particular love of Mid-Century architecture.

"It is not just a normal new build," she said.

Balfron Tower was designed by the Hungarian architect Ern? Goldfinger, and was completed in 1967. It features rows of "streets in the sky"'open walkways linking a narrow elevator tower to the main part of the building.

Laura Chan lived at Balfron for nine months during 2010. As a former architecture student who had written her thesis on Brutalist architecture, she was thrilled to be living in a real-life modernist icon with views over London.

Ms. Chen, 32, who now works as a project manager for a design consultancy, particularly liked some of Goldfinger's finishing touches, like the tiled communal hallways, with a different color used for each level, and the private balconies with their concrete planters.

The memories aren't all good. Like much of London's post-war social housing, Balfron Tower suffered from neglect and lack of maintenance. "The flats were quite damp, and cockroaches lived behind the concrete panels in the kitchen and bathroom and every so often they would come out," she said. "If both the elevators broke down at the same time, which they sometimes did, it meant walking up 21 flights of stairs." 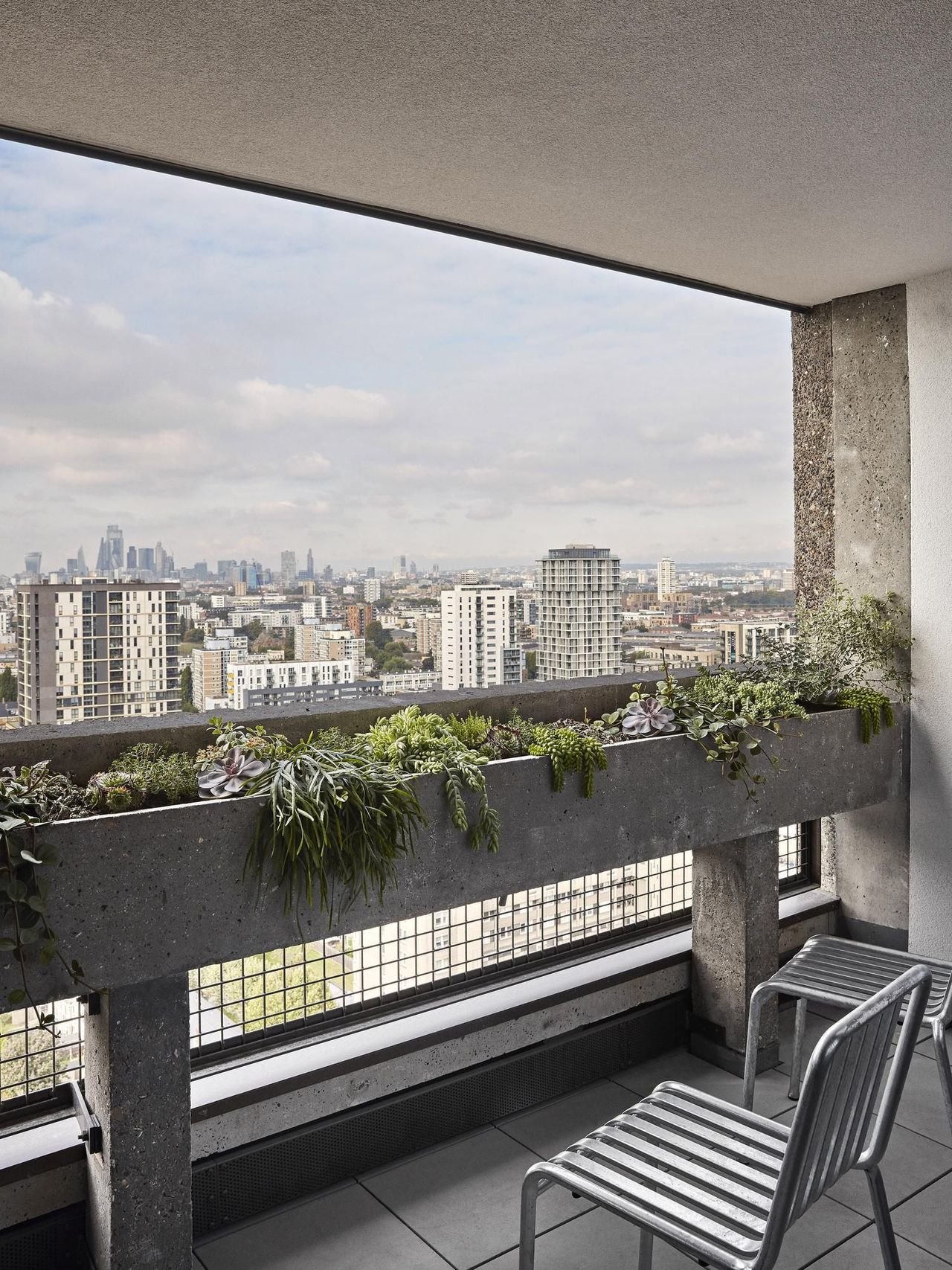 A terrace at Balfron Tower with original concrete planter.Jake Curtis

In his original design, Mr. Goldfinger devised six different apartment layouts. At the request of Historic England, Britain's leading conservation watchdog, the developers have preserved examples of each type of apartment, while modernizing the rest with an open-plan layout.

The interiors have been designed by two different firms: Studio Egret West, an architectural practice with a track record of revamping Brutalist buildings, and Ab Rogers Design, a firm known for its use of bold primary colors. Mr. Rogers thinks Balfron Tower is "one of the pillars of modernism.

"We are playing with Goldfinger's ghost, making the building relevant for today," he said.

Mr. Rogers took down walls'when it was built, fire regulations demanded separate kitchens and living room'and used much larger panes of glass in the floor-to-ceiling windows than those available in the 1960s. He also installed more storage.

Both teams of designers have used an era-appropriate palette of materials in the apartments. Mr. Rogers chose grey linoleum floors while Brian Mallon, associate director of Studio Egret West, opted for retro-style cork flooring in the bedrooms, terrazzo tiles in the kitchen and bathroom, and plywood doors for the upper kitchen cupboards.

Mr. Rogers's trademark is bright colors, but, because the apartments are compact, he chose "a super pure and clean" design. This means white walls, grey floors and kitchen cabinet doors, and a lighter-grey, stone-composite worktop'although he could not resist a bright red bathroom ceiling "to give you something to look when you are lying in the bath."

One thing that nobody wanted to change was Goldfinger's innovative approach to the building's public spaces. The color-coded corridors which Ms. Chen admired will be renovated with new tiles from the same manufacturer.

In the elevator tower, there are also communal rooms for residents. Goldfinger provided a library, music room, and hobby room, and these ideas will be revived. But his laundry room is no longer necessary and instead residents will get a yoga room and gym, a screening room and a dining room with its own kitchen and roof terrace. Residents will be able to book this space out for parties and events. 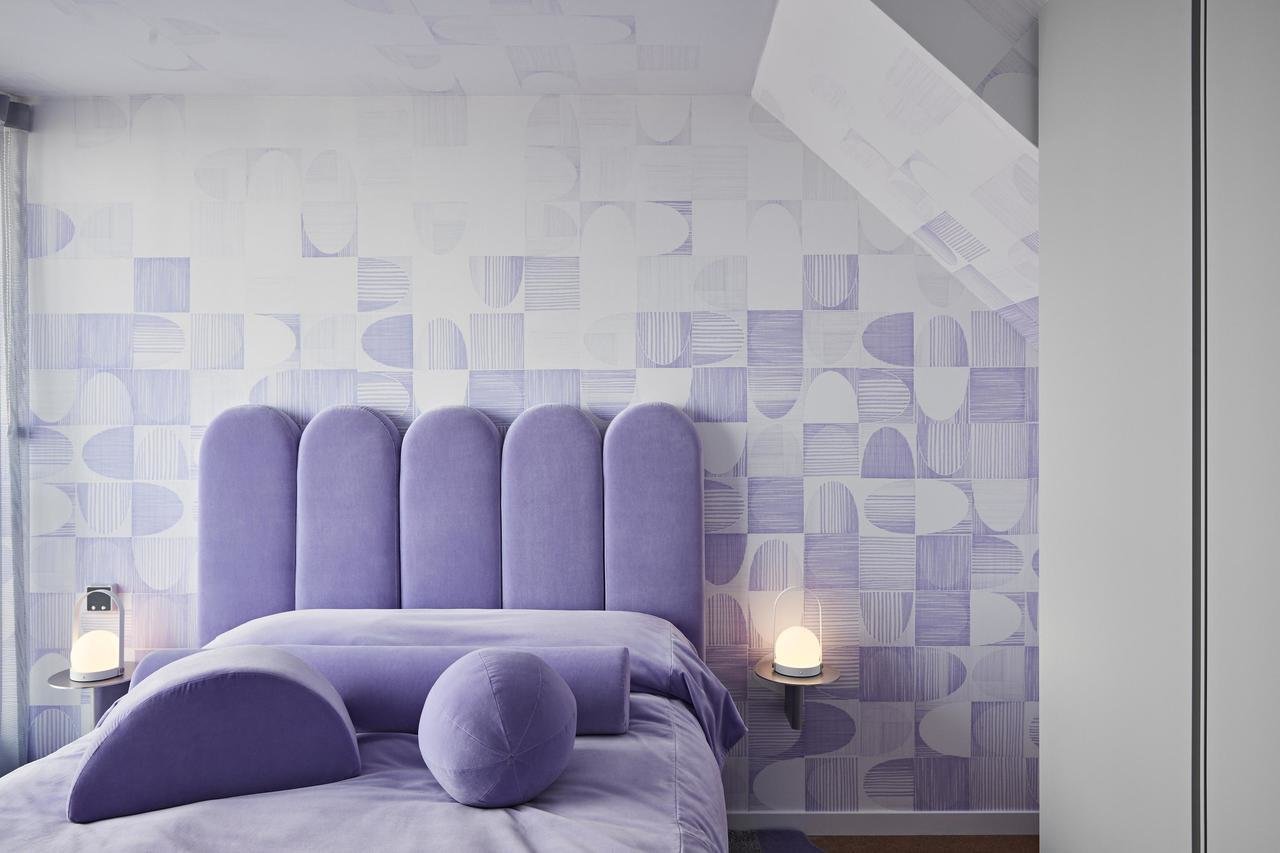 The interior of one of the newly renovated apartments.Jake Curtis

As well as renovating Balfron, Londonewcastle will be upgrading the grassed areas around the building, adding new planting and seating, and a ground-floor cafe. But it will not mess with one of Goldfinger's most famous ideas for Balfron Tower, the uniquely Brutalist children's playground which comes complete with a concrete slide.

Ms. Schuett accepts that the project will appeal more to London-based architects and "creatives" than to buyers from China and the Far East'currently London's most active overseas investors'looking for a basic rental apartment. "But someone looking to really experience London will buy here," she said.

The area around Balfron, Poplar, was formerly a Victorian slum, and was largely rebuilt with housing projects after World War II. It is still one of the most deprived parts of London despite its location a mile from Canary Wharf, the city's thriving business and financial district. Regeneration of the area has started, and there is a construction pipeline of around 3,000 new apartments. But, with few local amenities, those who do buy at Balfron Tower will need both a love of Brutalist design and a pioneering spirit.

The Architect Who Inspired Writers

Ern? Goldfinger was born in Budapest, Hungary, in 1902. He studied architecture in Paris and was inspired by the work of modernists like Mies van der Rohe and Le Corbusier. After moving to Britain, he began designing private homes, moving on to public housing after WWII. 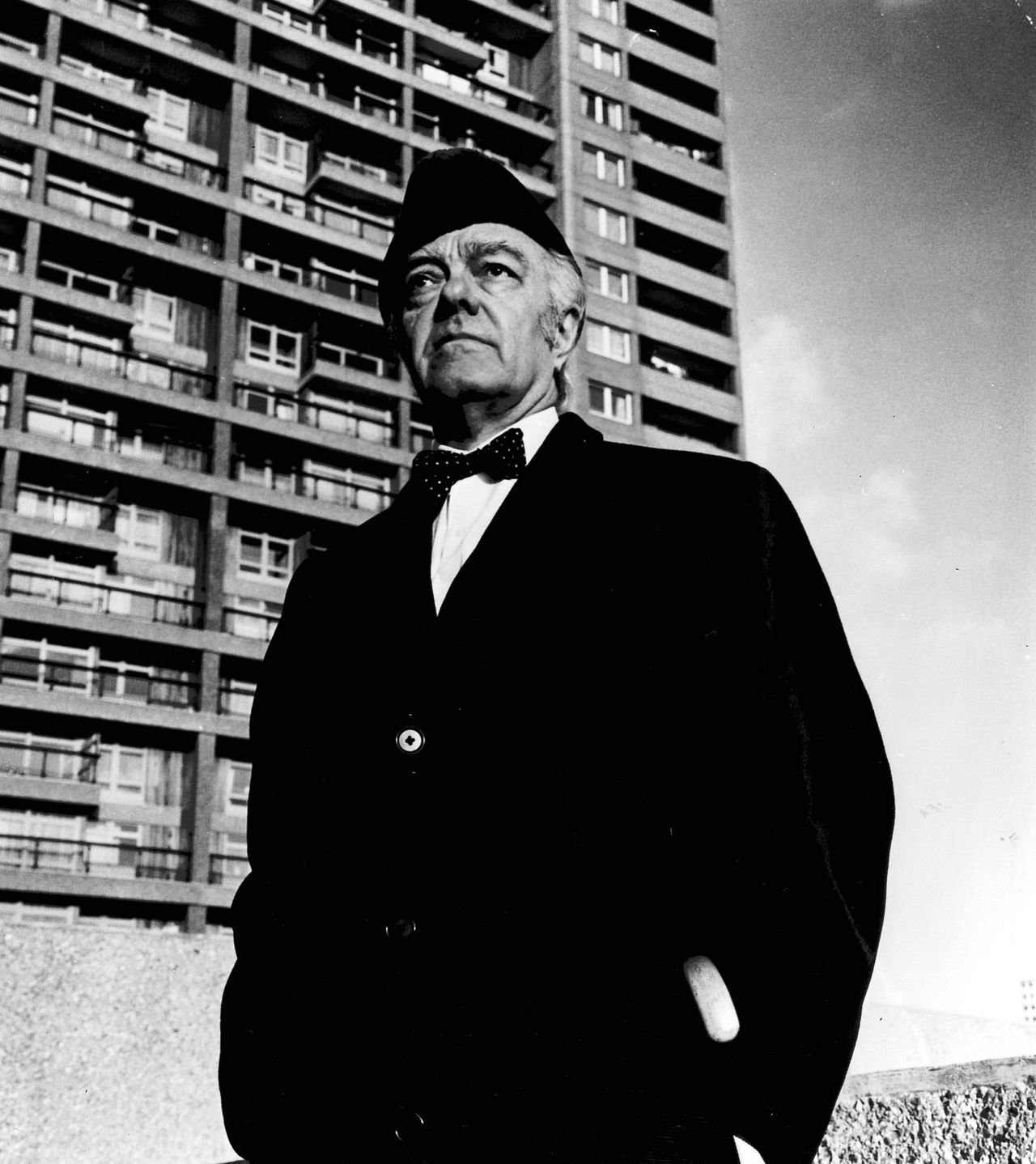 Mr. Goldfinger designed some of London's first skyscrapers, including Balfron Tower, which was amongst Europe's tallest buildings in the late 1960s.

When the novelist Ian Fleming named one of his most memorable villains Goldfinger, the architect was livid'although it is unclear whether Mr. Fleming personally disliked Mr. Goldfinger or simply liked his name.

Mr. Goldfinger began legal proceedings against Mr. Fleming's publisher. Mr. Fleming then threatened to change the character's name to Goldprick. The publisher finally agreed to pay Mr. Goldfinger's legal costs and clarify in ads and future editions that the book's characters were fictitious.

Mr. Goldfinger also inspired J.G Ballard's 1975 novel "High-Rise," about residents of a building modelled on Balfron Tower driven to violence. Its antagonist was the architect, Antony Royal, who lived in a penthouse atop the building.