The streets of Grove Park, in Camberwell, South London, are a residential oasis. Large Victorian villas and terraces, mature trees and ' for a lucky few ' far-reaching views to the city define this little enclave, set behind the grand Georgian splendour of Camberwell Grove and fiercely protective of its conservation area status. Over the past few years, the Bermondsey-based architect John Smart and his team have made a notable stamp on the area. A decade ago the firm completed the DKH building, an award-winning modern apartment block just a short walk from Grove Park, and in the years that followed has built a number of radical refurbishments and restorations in the streets of Grove Park, creating contemporary apartments and bringing grand houses back into use.

Smart's latest project continues the trend. Sandwiched between two of the studio's larger developments, St John's Orchard and St John's Villas, set back from the road, is a former place of worship (known locally as a chapel albeit never actually consecrated). Abandoned for many years, Smart's clients sought to transform the modest brick building into a modern family house, all the while retaining the qualities of space and the memories of its former use. The site was a challenge from the outset, overlooked on all sides and with strong local opinions as to its retention and eventual use. 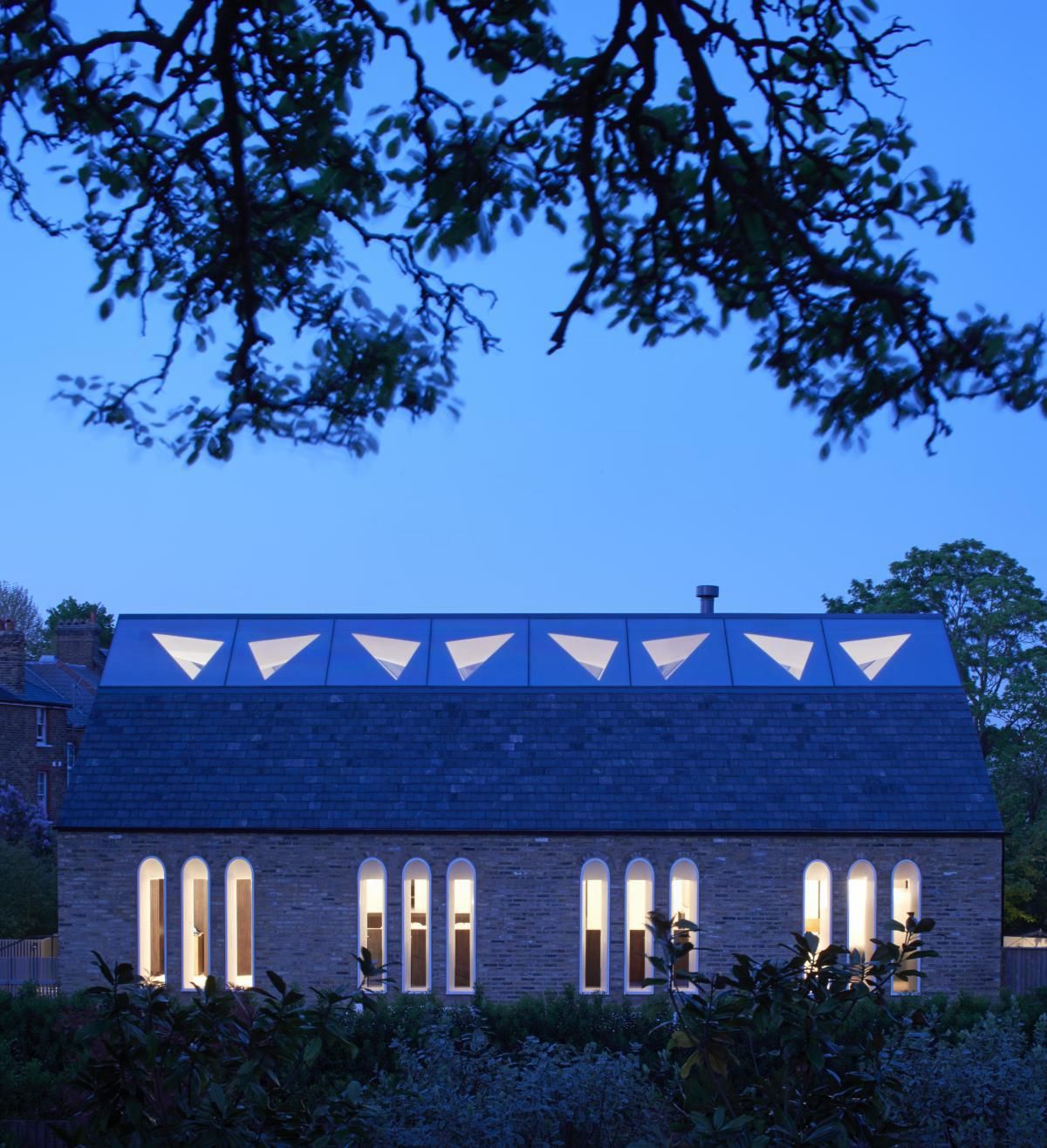 The transformed space features distinctive geometries that enhance the connection between old and new.'Photography: Edmund Sumner

Eventually an approach that suited everyone was agreed. The shell of the original building has been retained, while a new lower ground floor was carved out of the sloping site. This space is home to four bedrooms, one ensuite, and a study area, with a run of new window openings to the garden. A muscular, wood-clad staircase is suspended from the ceiling, its dark form creating the feeling of ascending up from a crypt.

This ecclesiastical edge is strengthened by the treatment of the main living space above, a soaring piece of modern gothic that is dominated by a faceted, angular roof. An entirely new structure, the roof appears to be stitched together from a colliding parade of angular planes, with a run of triangular roof-lights tucked into the ridge. As the sun moves across the sky, the facets appear to shift and change, creating a shimmering and luminous interior.

If that lofty vault wasn't enough, Smart has also installed a modern take on the altar/pulpit/pipe organ in the form of a mezzanine level set atop a twisting wall of fluted wood and brass. The architects point out that this lofty study space is effectively up in the 'clouds', a heavenly void that contrasts with the earthier feel of the living/dining space below. The work was carried out by Smart's in-house construction team, with the kind of craftsmanship and attention to detail that has characterised all the studio's work to date, whether it be speculative developments or for private clients.

The excavations also allowed for the creation of a spectacular new garden landscape, with an angular terrace formed from slabs of rusted steel flanked by wild planting. Designed by Jane Brockbank Gardens to complement the interior of the house and the original reclaimed bricks, the entire ensemble adds up to a spiritual, cloistered retreat from the city. 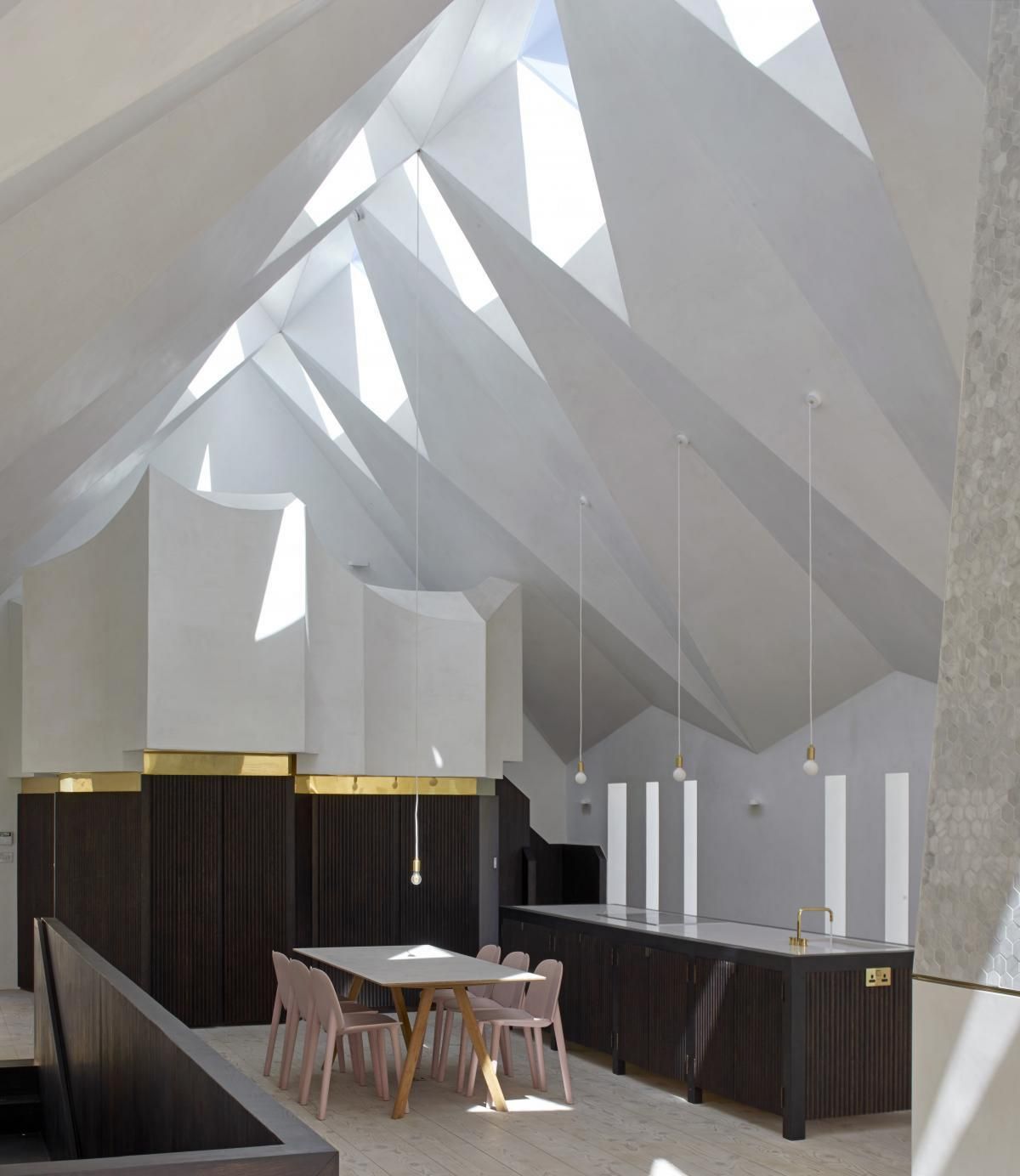