The total number of build-to-rent homes completed, under construction and in planning across the UK has increased by 30% in the past year.

The data, which is produced by Savills and commissioned by the British Property Federation, shows there are now 117,893 BTR homes at various stages of development, up from 90,761 homes at the start of 2017.

'At this rate of growth, we expect that the build to rent pipeline could double to around 200,000 within the next two years,' said Jacqui Daly, director at Savills residential investment research and strategy.

The total number of completed homes has surged 45% year-on-year to 20,863 while the number of homes under construction has increased by 47% to 33,075.

Growth in the number of homes in planning is less dramatic, rising 19% on last year to 53,892. The BPF said that for the first time the research tracked the capacity of strategic sites across the country identified for BTR in the total figures for 'in planning'.

A total of 17,578 homes have been earmarked by local authorities and developers for delivery on these sites.

The number of BTR homes continues to grow in London and the regions. Outside the capital, the North West leads the way with the highest number of homes at various stages of development.

The BTR sector is also diversifying with more houses recorded in the figures than previous years. Some 17% of schemes in the pipeline included houses, rather than just apartments.

'The build-to-rent sector is evolving quickly, with significant delivery in the regions and more houses, rather than just apartments, coming forward,' said Ian Fletcher, director of real estate policy at the BPF. 'Policy is also adapting, as to date the sector has grown without a planning blueprint. This is now changing. With the draft revised National Planning Policy Framework, local authorities will now have to specifically identify how many new rental homes their respective areas need.'

Minister of state for housing Dominic Raab added: 'The 45% increase in completed build-to-rent homes is good news, but we're restless to do more. Our revised National Planning Policy Framework is a crucial next step in supporting the build-to-rent sector, reforming planning rules, and helping to deliver 300,000 homes a year by the mid 2020s. 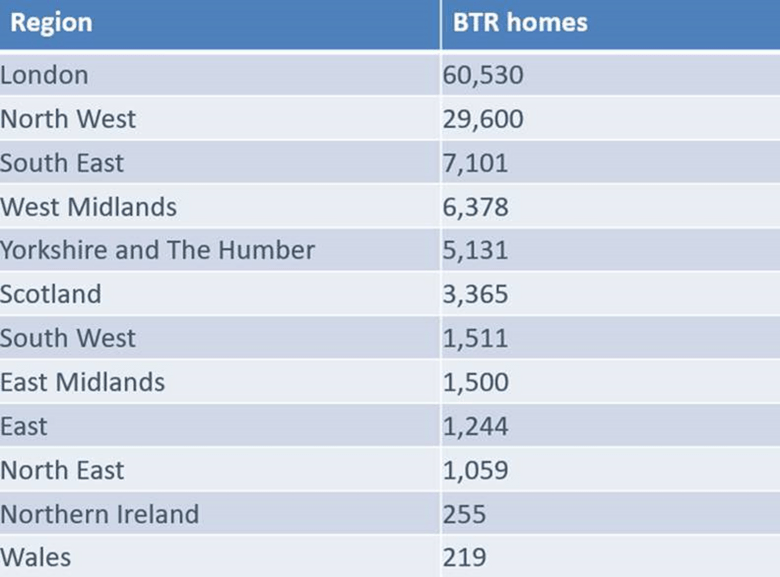