With an estimated 320,000 people homeless in Britain, charities are turning to using tiny 'pods' as temporary accommodation.

With a single bed, a chemical toilet and a phone charger in a very tight space, a 'micro sleeping pod' is very much basic living. But for those that live in the tight shelters, set up by a charity, they provide a link between living on the streets and finding more long-term accommodation. And then there is the cost ' at '10,500 for the pair, the pods in Newport, Wales are significantly cheaper than building a flat, according to Amazing Grace Spaces.

From Bristol to London, architects, planners and charities are developing unique styles of accommodation to cope with the housing crisis. With private rents increasing and the local housing allowance frozen until at least 2020, homelessness continues to spiral ' last year Shelter said at least 320,000 people were homeless in Britain, up 4% on the previous year.

Although the government says it has delivered more than 430,000 affordable homes in England since 2010, research from the National'Housing'Federation and Crisis found this was not enough, with 340,000 a year needing to be built until 2031 to address the shortage. As a result, charities and organisations are trying to find new ways to plug the gap.

But are they the way ahead? In Newport, Amazing Grace Spaces co-founder Stuart Johnson says the tiny pods act as a safe space. 'We have a general shortage of housing, but especially single person's accommodation and, even if available, the rents are out of their reach.

'It is very difficult for someone living on our streets to get back into accommodation and it is a big jump. Just saying we need more permanent housing without helping those that cannot access it, isn't helping anyone.'

The Homeless Foundation took a similar approach when it launched its iKozie micro home, a self-contained, fully furnished one-person home with cooking facilities, washing machine and bedroom, in Worcester in September 2017.

Trustee Kieran O'Donnell says such properties need to be financially viable. 'We looked at the most efficient way to provide as much accommodation as possible with limited resources. If it would cost '120,000 for a one-bed flat but we could produce something for '40,000 with the same accommodation, it was a no-brainer.' 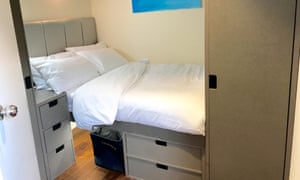 He says that the unit has been valued at '80,000, proving the long-term financial viability of this approach as it will appreciate in value and become a valuable long-term asset for the charity. There are plans for a further 16 iKozies in Worcester.

Similarly, YMCA has, in the past, developed tiny homes for single occupants, with a housing development of 36 units of just 26 sq metres, costing '30,000 each, created in Mitcham in London in 2015.

Richard James, chief executive of YMCA St Paul's Group, says the units provide support to single people who are unable to afford the private sector. Still, the rent is '155 a week, although James says this is less than market value, and tenants don't require a bond. Tenants tend to stay for two to five years, usually after having been living in a hostel for 12 months. 'We encourage them to save a bond so when they're ready, they move into the private rented sector,' says James.

The units are certainly tiny ' and smaller than the 37 sq metre minimum required by new properties going through the planning system in London. 'It is very easy to criticise,' says James. 'People are really happy with what they have got. If they went to the private rented sector, they'd be living in a shared apartment, looking at 12-15 sq metres of space each.

'These are purposely designed to make use of the space. The mayor has challenged us to look at bigger space but what we need to achieve has to fit on the back of a lorry. Land prices are ridiculous. This is a stepping-stone home, not a home for life. The most important thing for them, rather than size, is having their own front door.'

Crisis, the national charity for homelessness, says it welcomes the innovation to help house some of the country's homeless, but believes more homes need to be built. 'It is understandable for people to look for innovative ways to tackle the chronic shortage and it can be better value for money,' says senior policy officer Sarah Rowe. However, she says there is a risk that some types of innovative accommodation could compromise space standards.

'As a nation we don't want to see a race to the bottom in the race to tackle homelessness. It's important to focus on improving the availability of temporary accommodation and that we don't lose sight of creating more permanent homes that those on lower incomes can afford. We want leadership from the government to focus on increasing genuinely affordable homes at social rent levels, and something the government could immediately do is make sure housing benefit covers the cost of the private sector, which is inaccessible.'

In Bristol, there are plans to create two sets of quick-build modular developments designed to look like shipping containers, with a mix of tenants including those on low-incomes and students in one-bedroom units with shared spaces.

LaunchPad, 31 one-bed flats, including a mix of allocated YMCA tenants, will open later in the year in a car park in Fishponds, while the Zedpod consists of 11 units. Those living there will be on two-year tenancies to help get themselves established. However, while the ZedPods are 39 sq metres in size, the LaunchPads are just 22.

'We're trying to find a different solution to a difficult problem,' says Jez Sweetland, project director of Bristol Housing Festival, which was launched in 2018 to engage the city with opportunities around modular housing. 'Purpose-built modular can be beautifully designed with every square inch accounted for. There's a debate to be had about how not all space is equal.' 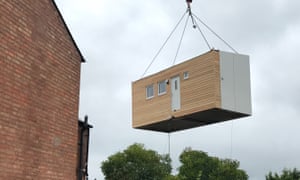 In Bristol, Rob Earnshaw has a home with a sofa strewn with colourful cushions, a bedside table and a kitchen with a fridge and microwave. The difference from a standard home is that it measures just 30ft by 10ft and is a converted shipping container. While it falls short of the government's recommended minimum space standards for a one-bedroom dwelling, the 61-year-old is pleased with his home, which is certainly larger than the tent he lived in for 10 months when he lost his home after falling into arrears.

'This place is addictive,' laughs Earnshaw, who moved in two years ago after Help Bristol's Homeless, a local charity which has built 16 shipping containers, offered him a base for a short period. 'It's wonderful. I've got to know others on the site and I feel part of something bigger than me.'

The shipping containers are the brainchild of Jasper Thompson, founder of Help Bristol's Homeless. Thompson, who lived in one himself when he worked in Afghanistan as a personal protection officer. He was inspired to set up the unique accommodation after watching Bristol's homeless situation reach crisis point.

Thompson, along with the Spring of Hope charity, has also converted a double-decker bus into temporary accommodation for up to 12 people. 'It gives them somewhere to lay their head at night, feel safe, shower, have something to eat, and use the office address for jobs.'

The Ministry of Housing, Communities and Local Government says that 'providing quality and fair social housing is a top priority'. 'This is why we've freed up local authorities to build more council homes,' it says. 'We're also providing over '1.2bn up to 2020 to reduce all forms of homelessness. Since 2010 more than 430,000 affordable homes have been delivered in England and we're investing over '9bn, plus an additional '2bn after 2022, to push on and build more.'

In the meantime, many of those affected need urgent help. 'Some of the concepts offer a way to manage a crisis in that moment,' says Sweetland.