A "fanatical attention to detail" was required to complete the interior overhaul of this'London apartment, which'Coffey Architects'has covered in thousands of wooden blocks.

Situated in London's Clerkenwell neighbourhood, the two-storey flat ' named Apartment Block by'Coffey Architects'' has been finished with a minimalist fit-out that helps "retain the drama" of the home's historic interior.

The flat is in a building that was erected back in 1892 and served as a school before being converted for residential use in the year 2000. 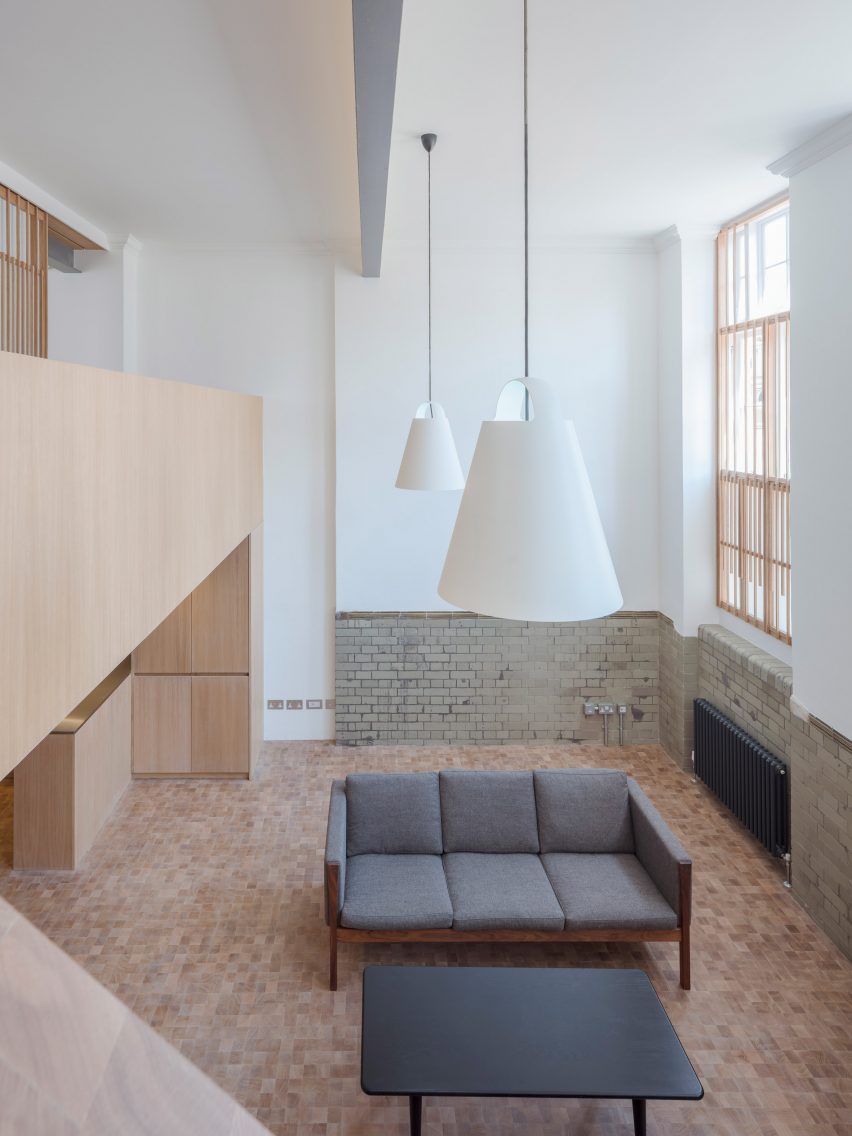 "The concept for the design was to celebrate the history of the building and make a clear definition between what is old and new," said Ella Wright, architect at the practice.

All recent interventions have thus been stripped back to unveil original details like a band of pale-green tiles that runs around the perimeter of the ground floor and three-metre-high sash windows. 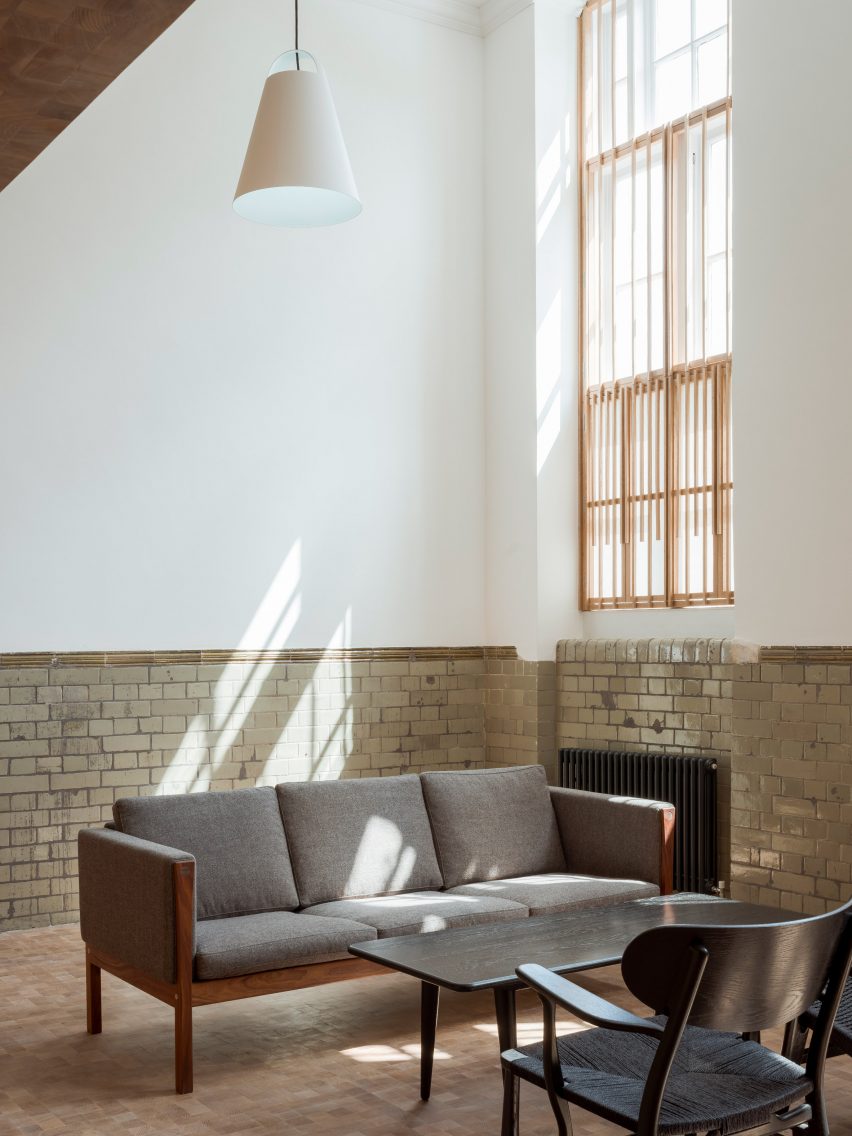 These are now fronted by timber-framed linen shutters that allow natural light to seep inside, creating what the practice describes as an "orchestra of shadows" as the sun moves throughout the day.

The mezzanine has also been extended by the practice to overhang the kitchen alongside a double-height living area. 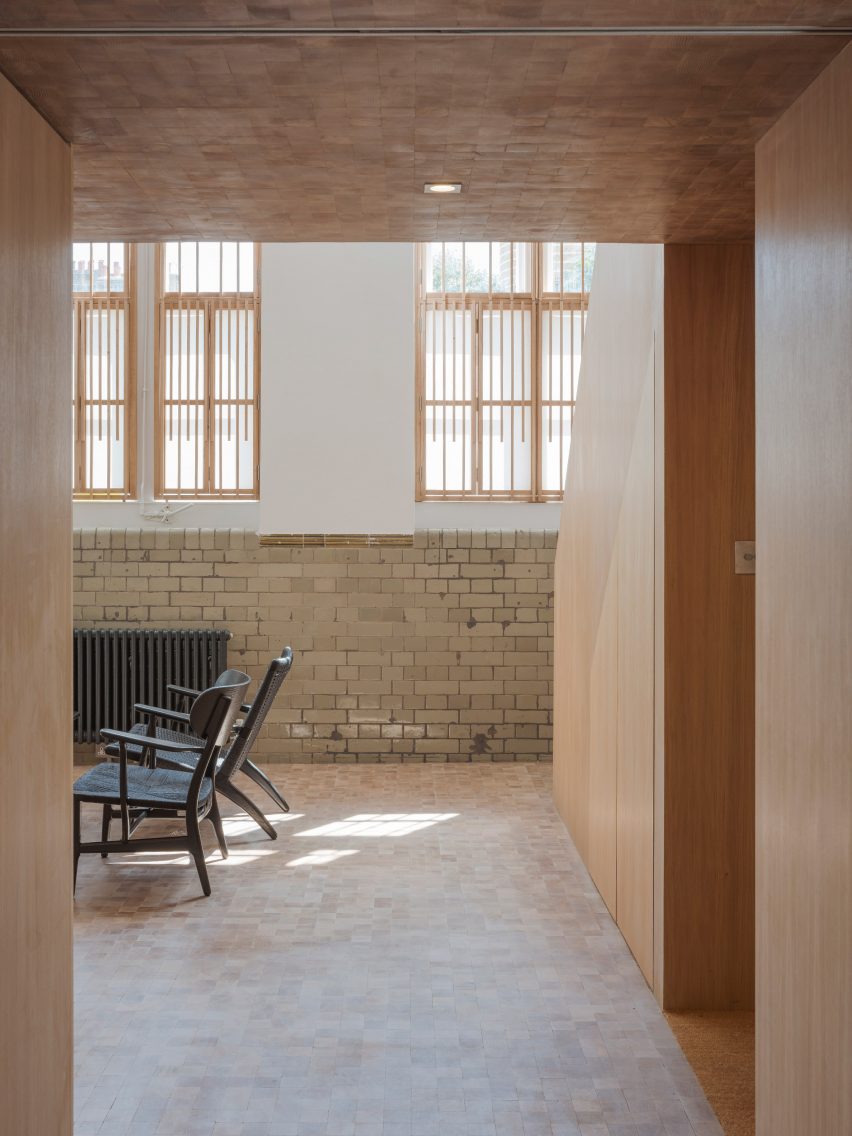 Surfaces throughout, including the floor and ceiling of the kitchen, have then been covered in 30,000 oak-wood blocks ' the aesthetic feature that lends the property its name.

Each of the blocks was cut and hand-laid by Ed McBeath from architectural contractor'Woods London'and joinery specialist James Wilkie. 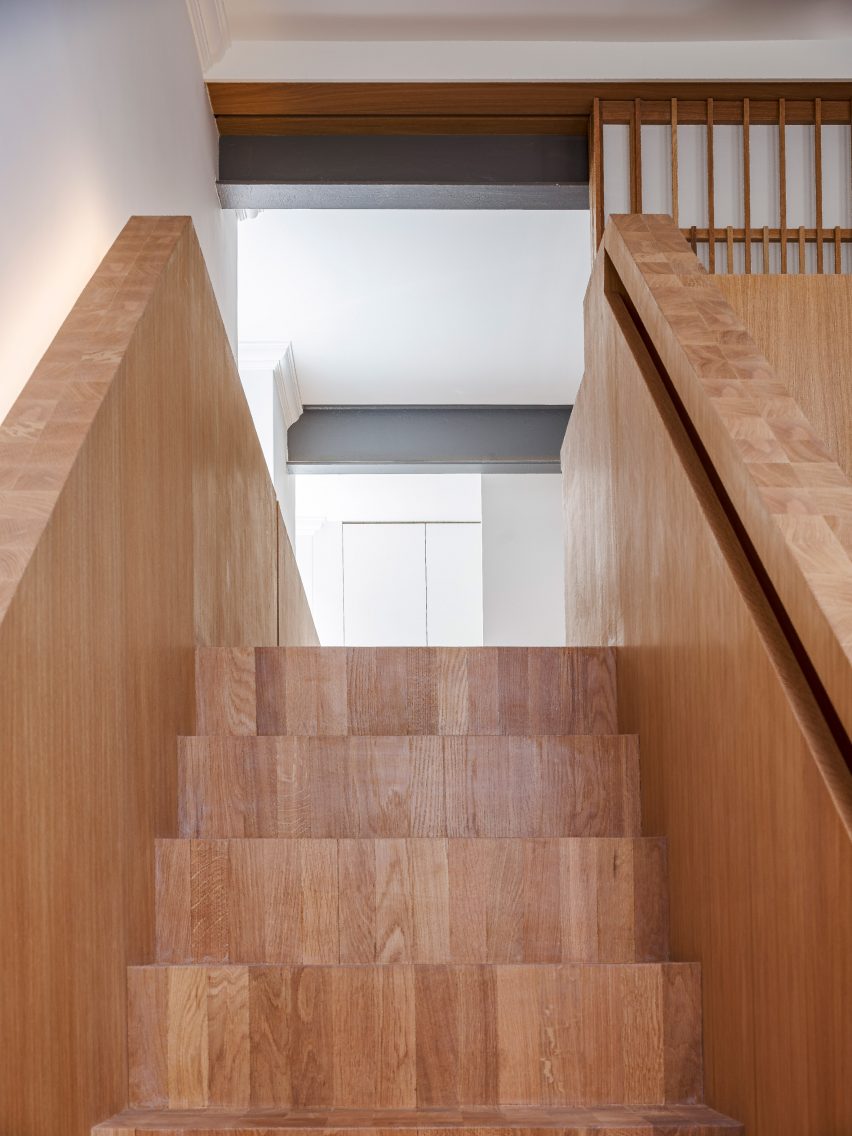 "It is a contemporary piece of hand-crafted, inhabited joinery inserted into a historic envelope; the two fused together in light and material richness," Wright explained.

"To achieve what we all wanted depended on fanatical attention to detail and the very best quality in construction ' it's a work of art and a great space to wake-up in," added the client. 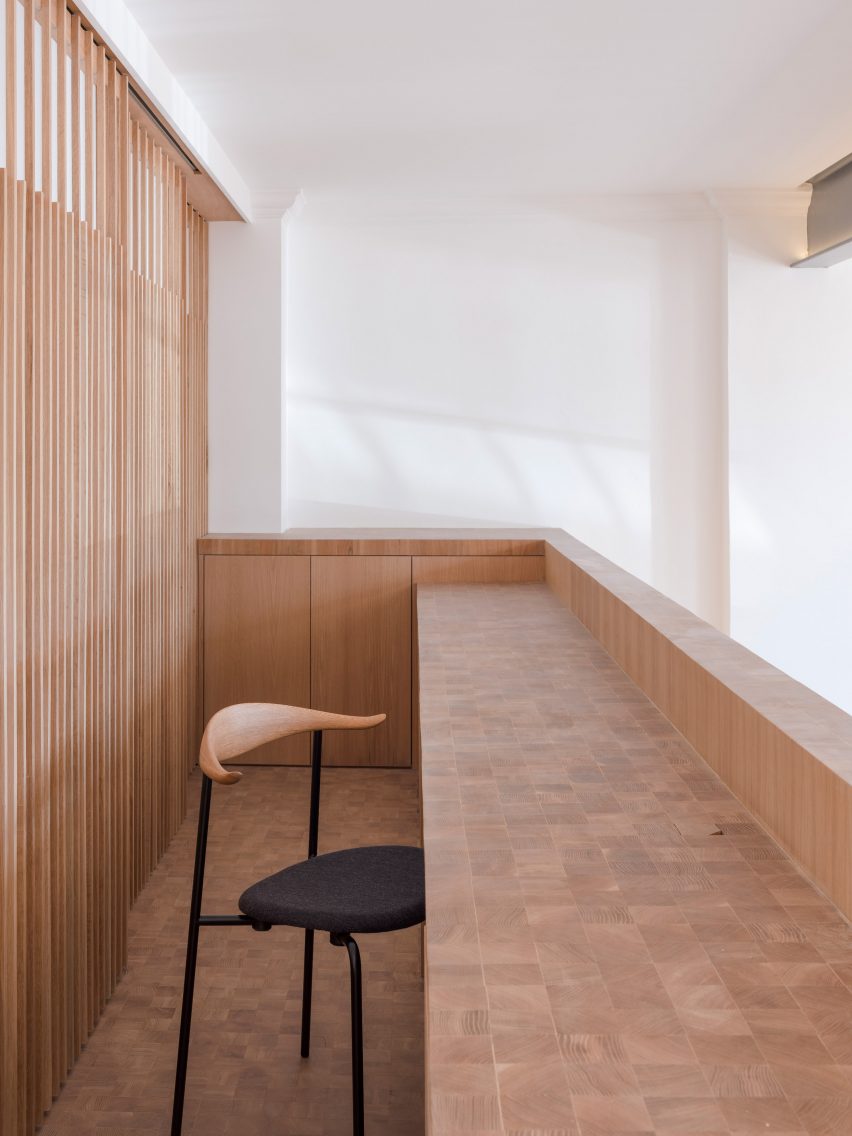 The wooden blocks have also been incorporated into the handrail of the staircase that leads up to the home's upper floor.

It's fronted by a small study area, which features an in-built work desk inlaid with further blocks. 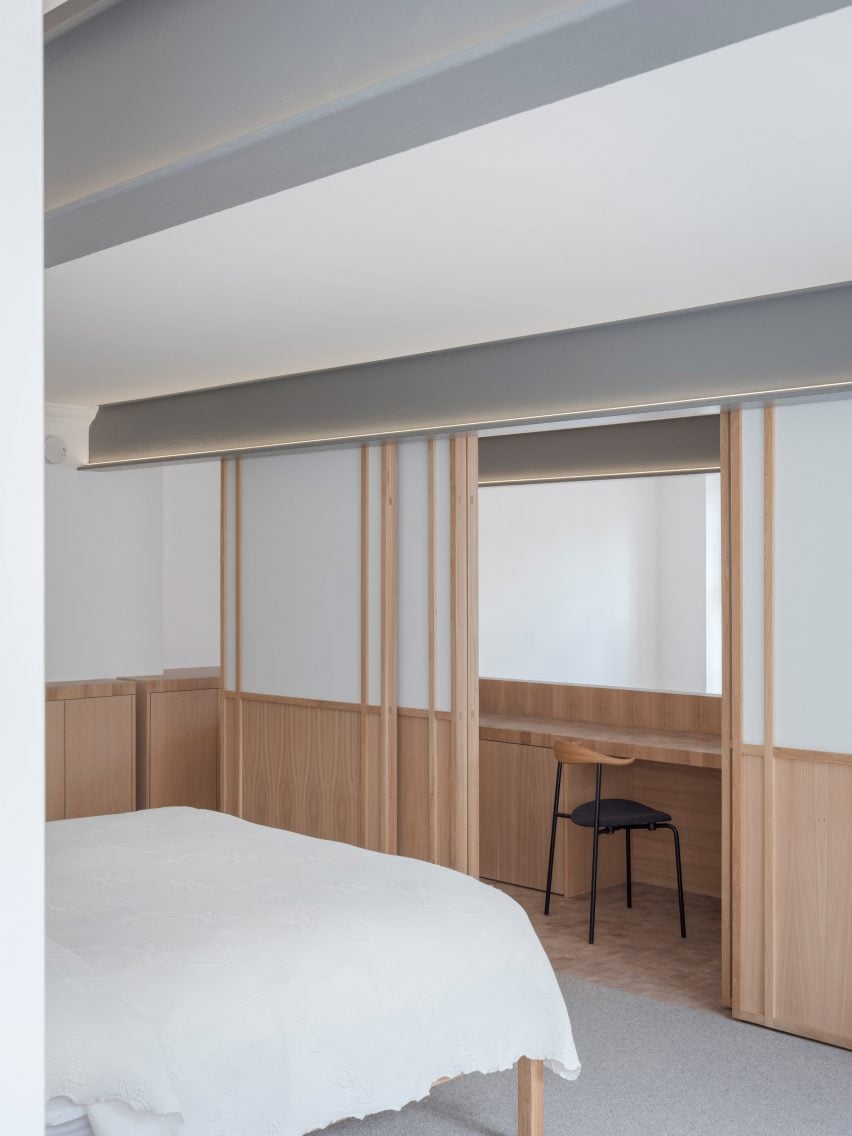 At ground level there is also a dining area that can be used as a second bedroom when required, complete with sliding pocket doors which provide additional privacy. 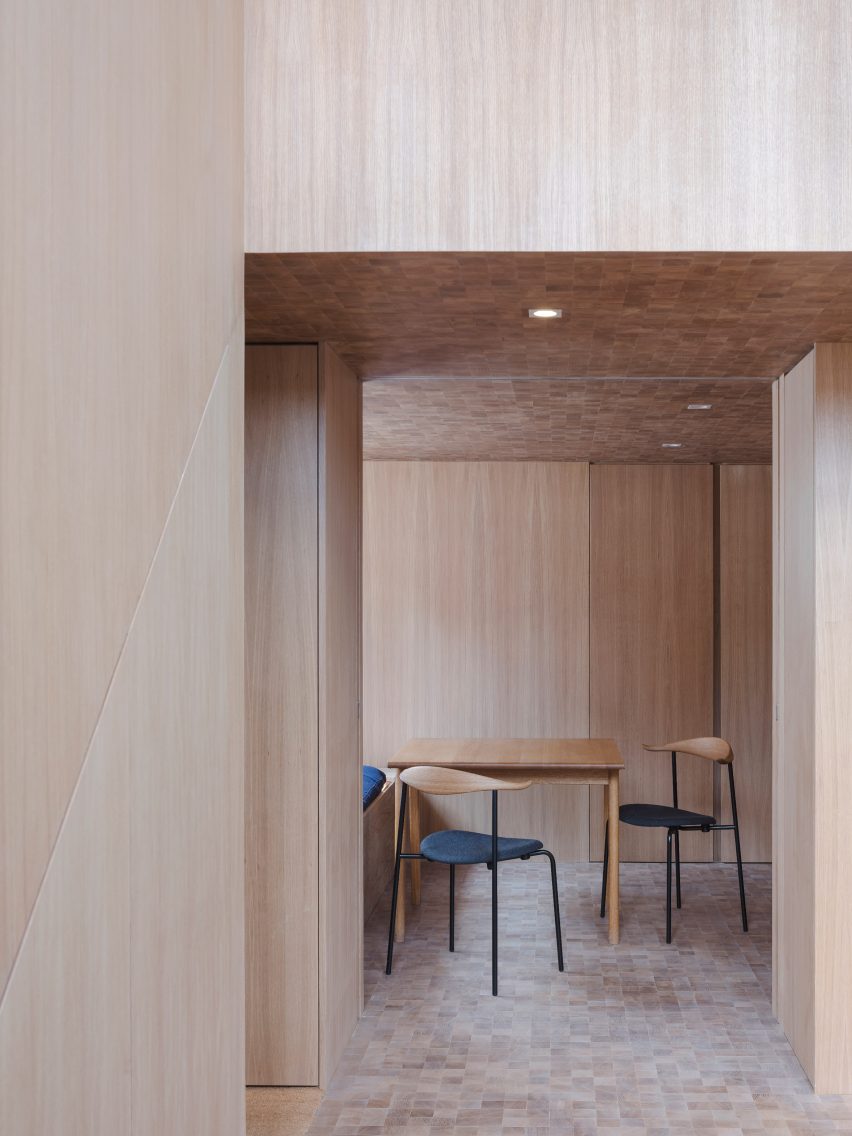 Apartment Block is just a stone's throw away from Coffey Architect's 2017 project,'Hidden House, which is built atop the vaults of a 19th-century prison.

The modestly-sized property is clad in reclaimed London stock brick and is punctuated with a series of glazed openings that keeps the home brightly lit despite its tucked-away location.