Creative leaders of'London's cultural institutions have collaborated with 10 designers to create an object of personal relevance to them from American red oak'wood'for'London Design Festival.

The designers, including'Jasper Morrison'and'Martino Gamper, have paired with the directors of London galleries, theatres and institutions to create the one-of-a-kind items, that each reflect an aspect of the recipient's life.

The objects ' which range from'outdoor furniture'to a dressing screen ' have been made over the summer in the Berkshire workshops of British furniture manufacturer'Benchmark.

Nine of the resulting pieces will be on display at the V&A for the duration of'London Design Festival 2019, which starts tomorrow and runs until 22 September. The final item will be on show at the neighbouring Natural History Museum. 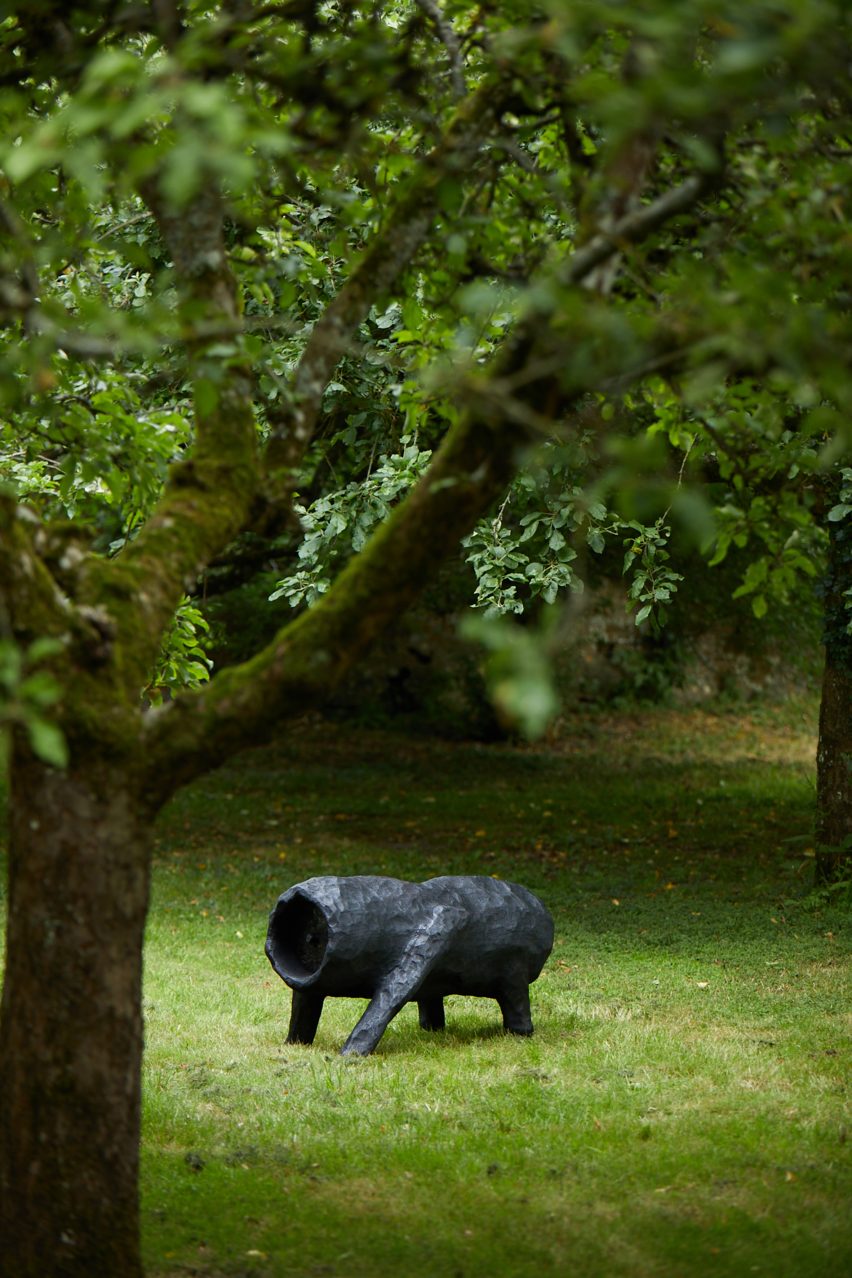 He called the project'Legacy'as he hopes that the individual pieces will be passed on to a family member or the institution at which they serve after the festival closes.

The American red oak wood was provided by the'American Hardwood Export Council, who supported the project. 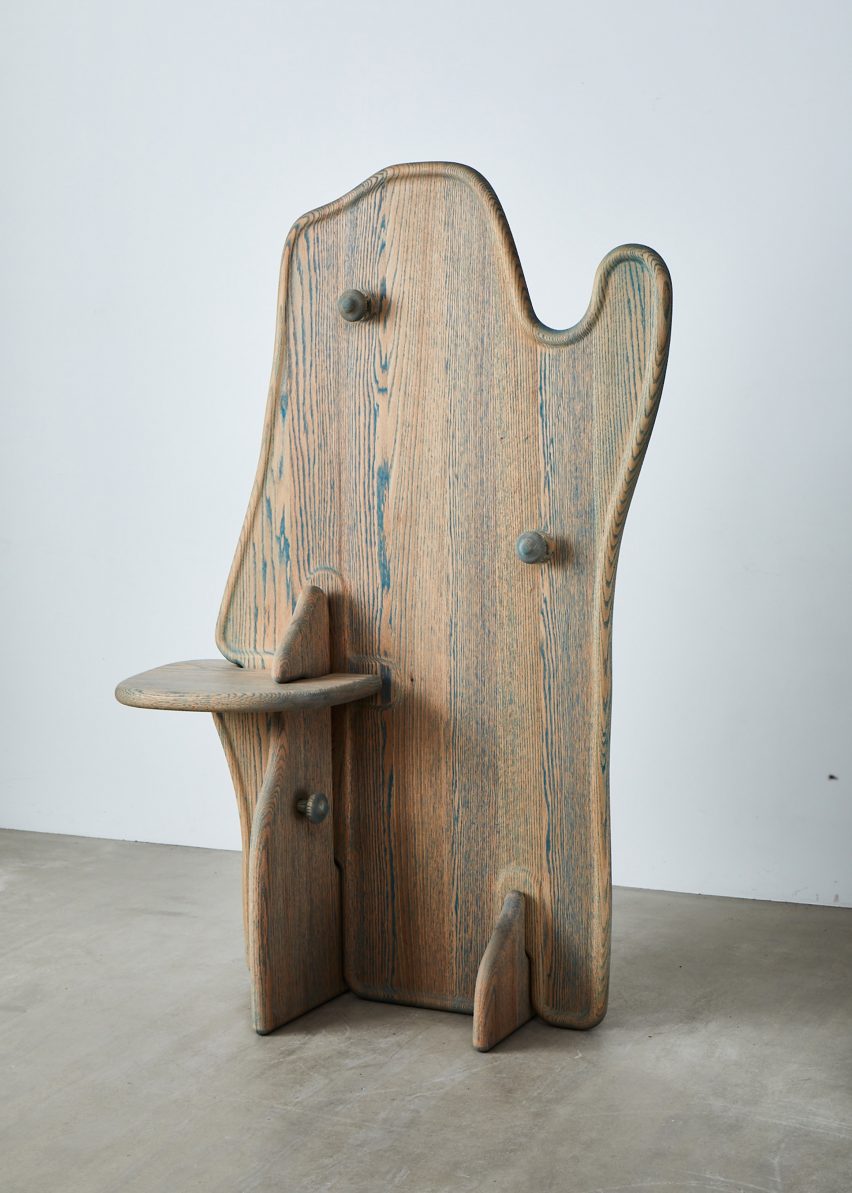 The designer has created a multi-functional dressing screen called Valet, based on Balshaw's request for a "a hanging-mirror-screen-storage-help-me-get-change-unit" that she could use when she needs to change her clothes for evening functions after the end of the working day. 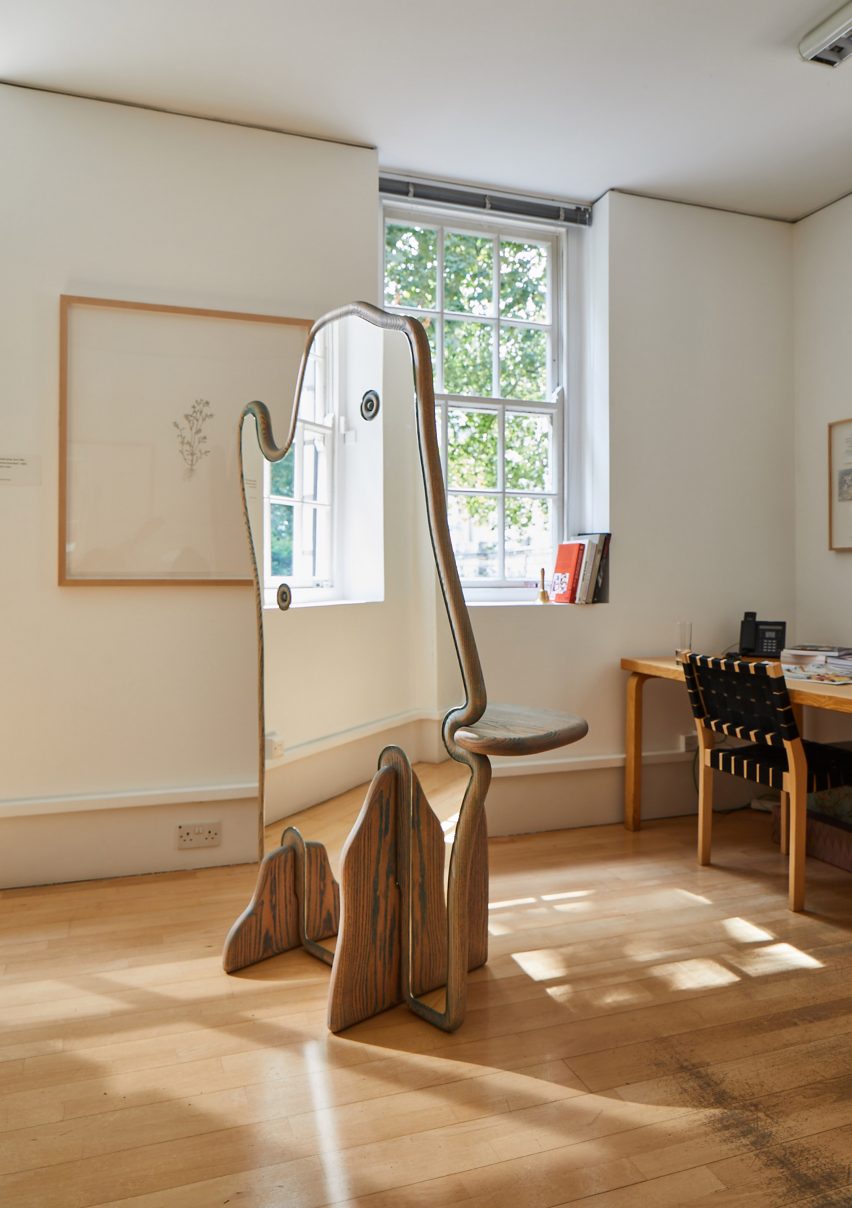 The freestanding unit has a "natural and soft form" with a number of hooks for hanging clothes, a ledge for storing small objects and a mirror on one side. It slots together like flat-pack furniture, without the need for additional screws or glues, and will stand in Balshaw's office at Tate.

"This piece has a personality. It's almost like a person standing in the room handing Maria her dress to put on," said'Lamb.

The designer exploited the porous nature of American oak wood by rubbing a blue dye into the surface of the components in various areas. 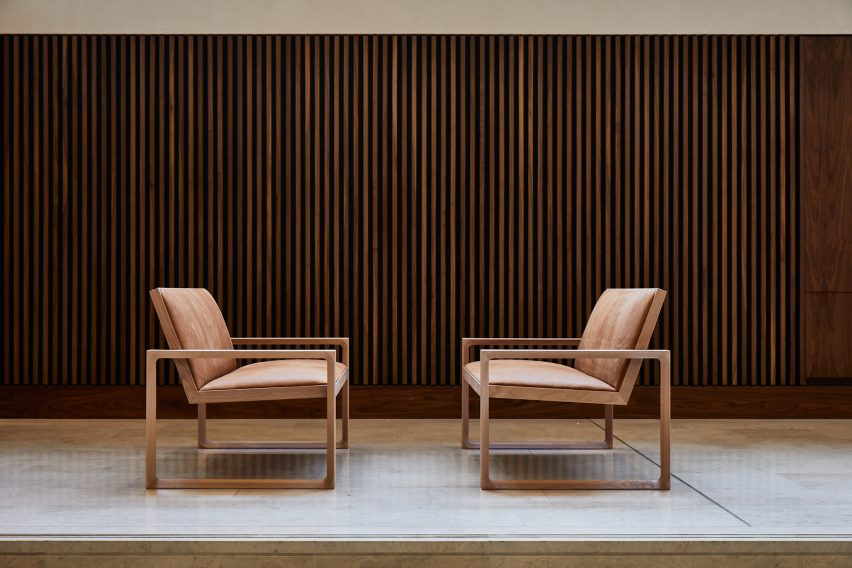 Although the sofas appear to be lightweight, they are bolstered with hidden metal rods, whilst the wood has been given a curved chamfer detail at the edges.

The pair of sofas are upholstered in brown'leather'and feature a rectangular frame at either end that forms their the legs and armrests. They will sit in Beard's meeting room at the Covent Garden institution. 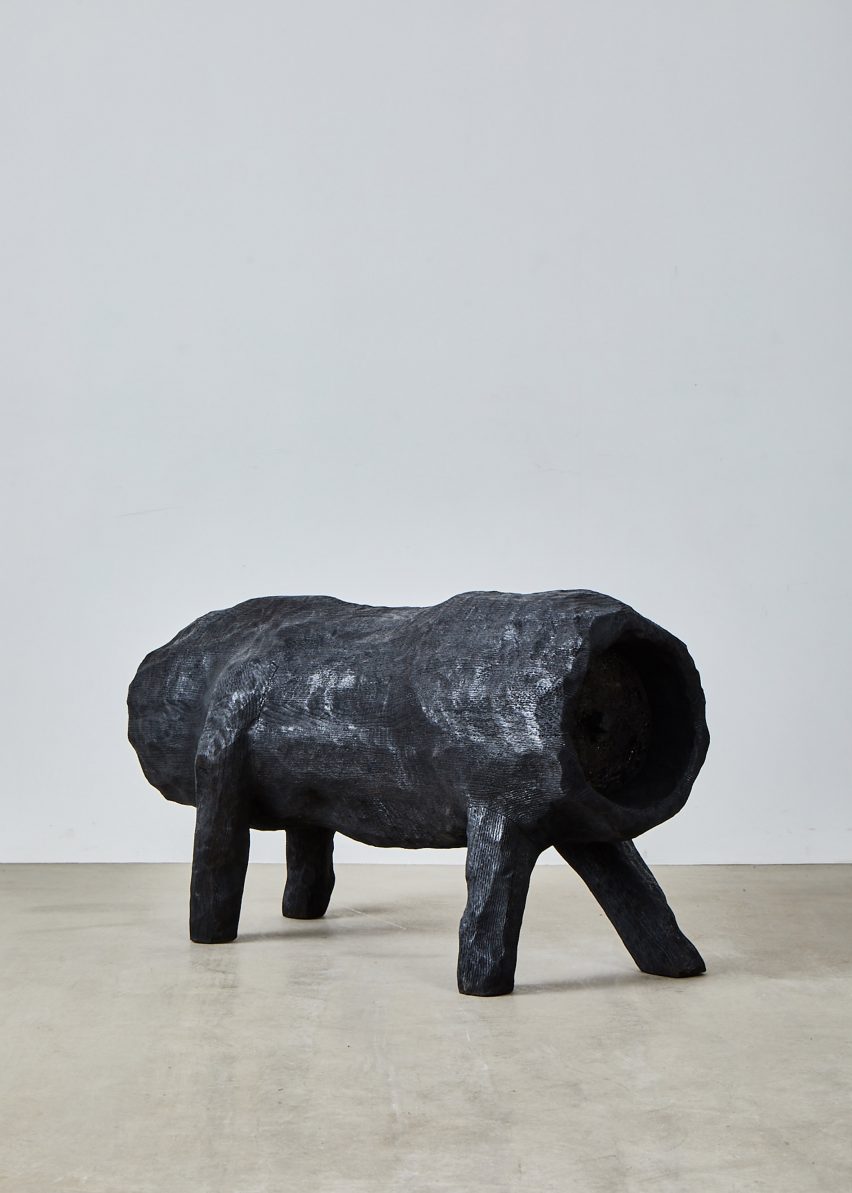 Science Museum director Ian Blatchford commissioned French designer'Marl'ne Huissoud'to create an engraved, blackened-wood beehive that will sit in a new permanent gallery about the future of agriculture at the museum.

"I think he knew my father was a beekeeper," explained Huissoud. "But more than just a beehive he wanted a piece that would go in the museum collection and open a dialogue around biodiversity and sustainability. This piece is about helping bees to live."

Called Beehave, the hive is a hollowed timber cylinder that stands on four legs. Once the shape was crafted, the American oak wood was scorched to create a blackened surface. 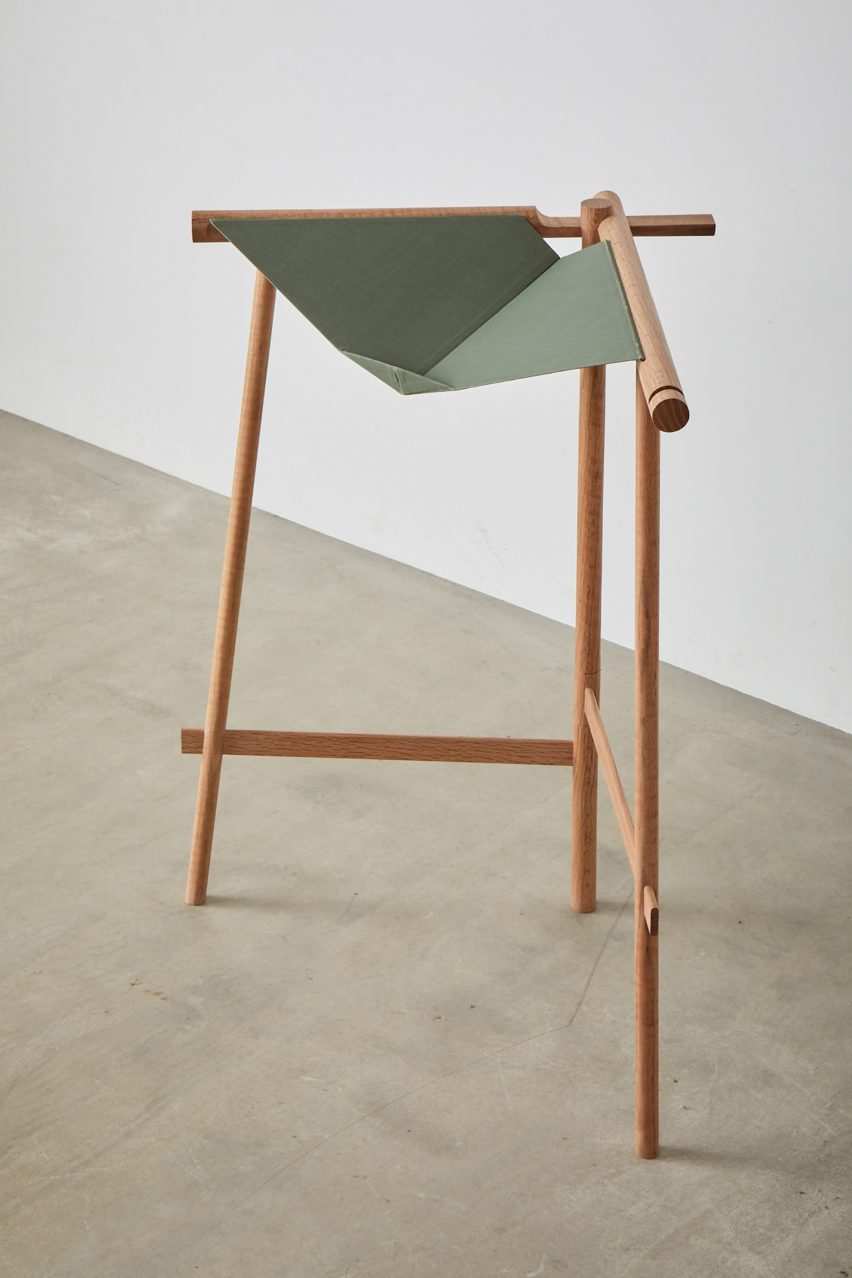 Yael Mer and Shay Alkalay of'Raw Edges'were chosen by Whitechapel Gallery director Iwona Blazwick to create a simple folding book stand titled Wooden Hinge. The hinges of the piece are also made from the wood, rather than from metal.

The stand will be moved to the bookshop at the gallery after the exhibition, where it will house the entries to the gallery's book awards as well as new library catalogues.

The wood for the piece was turned into shape using a lathe and hand-held tools. 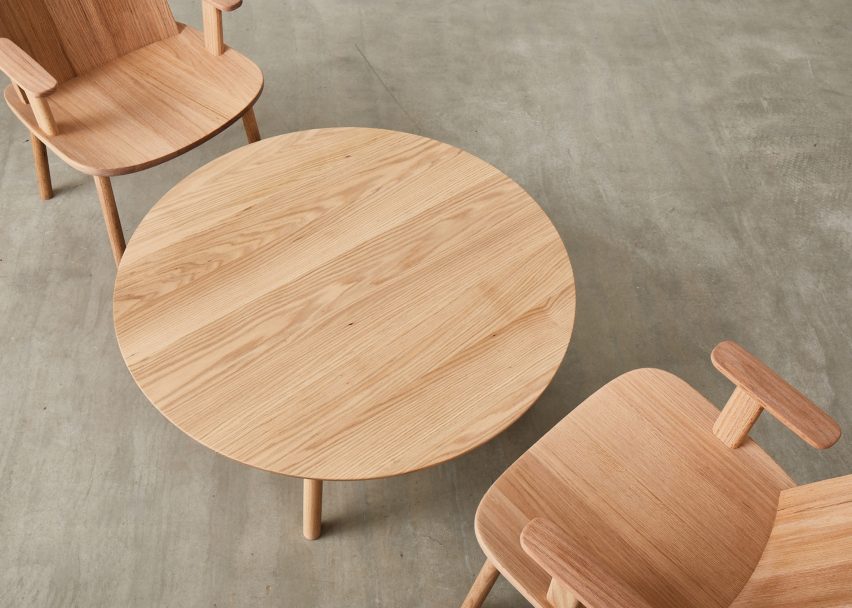 Jasper Morrison created a table and two chairs for the director of the V&A, Tristram Hunt

The V&A museum is once again the main venue of the London Design Festival. The museum's director, Tristram Hunt, collaborated with Jasper Morrison on a set of two chairs and a table, called Fugu.'The furniture will sit in the directorate office at the museum.

Hunt's brief was for furniture that is comfortable despite being made entirely from wood. Morrison worked to create a gently curved back and seat to the chairs with armrests to accommodate this request.

Each piece was shaped on a woodturner, then the curve cut with a CNC machine before being hand finished. 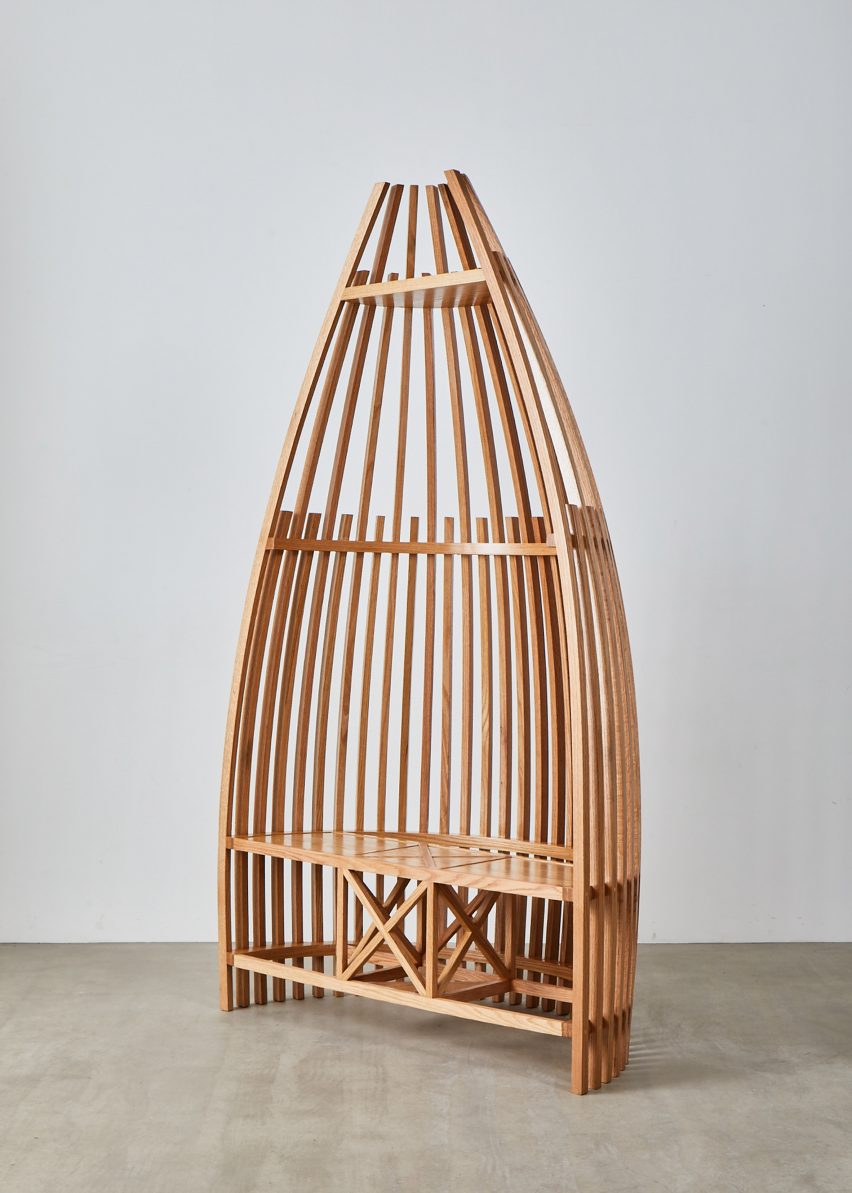 Influenced by the wooden outdoor furniture often found in the Caribbean, whilst the curved steam-bent hood is intended to resemble the hull of the slave ships that carried his ancestors from Africa, as well as the boat that brought his parents to the UK.

Kwei-Armah intends to pass the seat on to his grandson, but meanwhile it will sit in the garden of his London home. 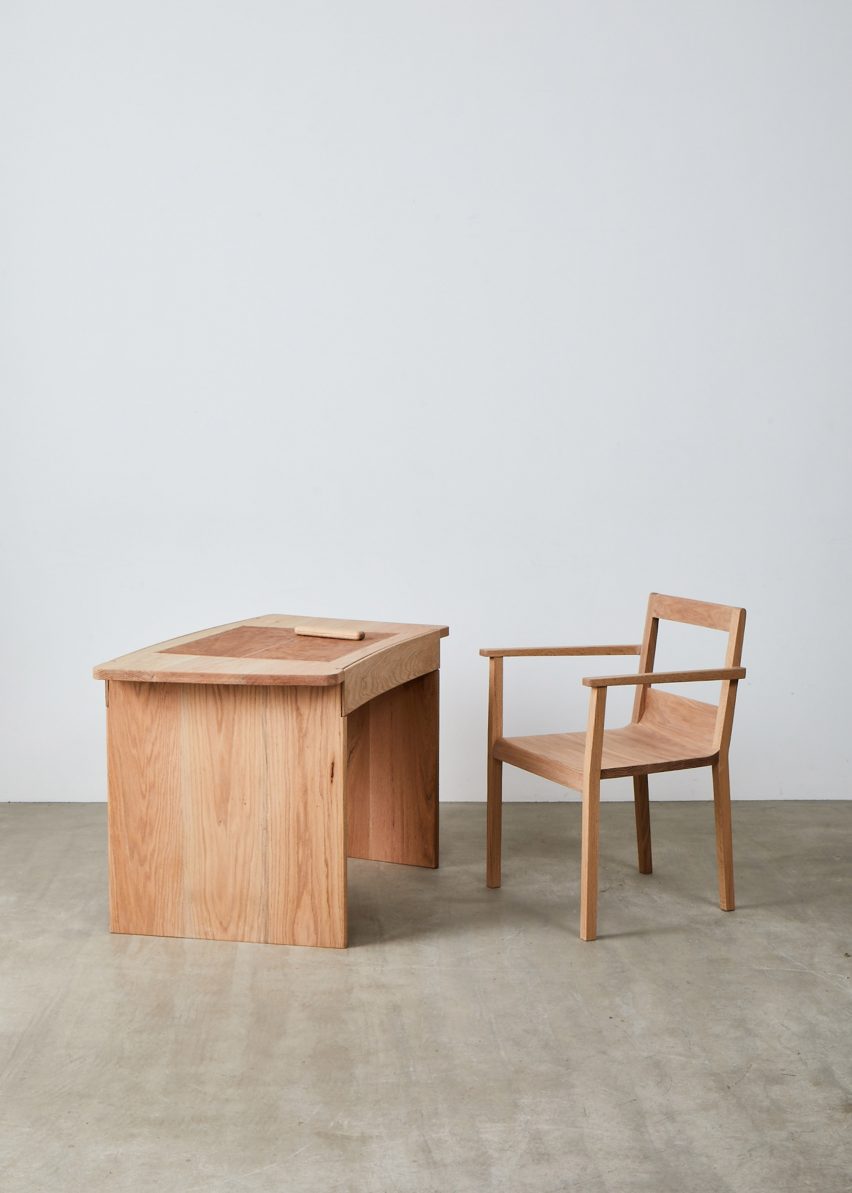 Sebastian Cox'made the Writer's Collection for CEO of the British Film Institute Amanda Nevill. The collection consists of a pen holder, desk and chair.

"I wanted the desk to capture the view overlooking that box office because it's almost like being in the wings of a stage," said'Cox. "The idea is that over time this desk and chair will absorb the creative energy of the people who have used it and become a place where emerging British creatives can come and absorb some of that energy."

The pen holder and a sheet of paper for anyone who uses the desk to sign are hidden in a secret compartment behind a leather panel in the top of the desk. 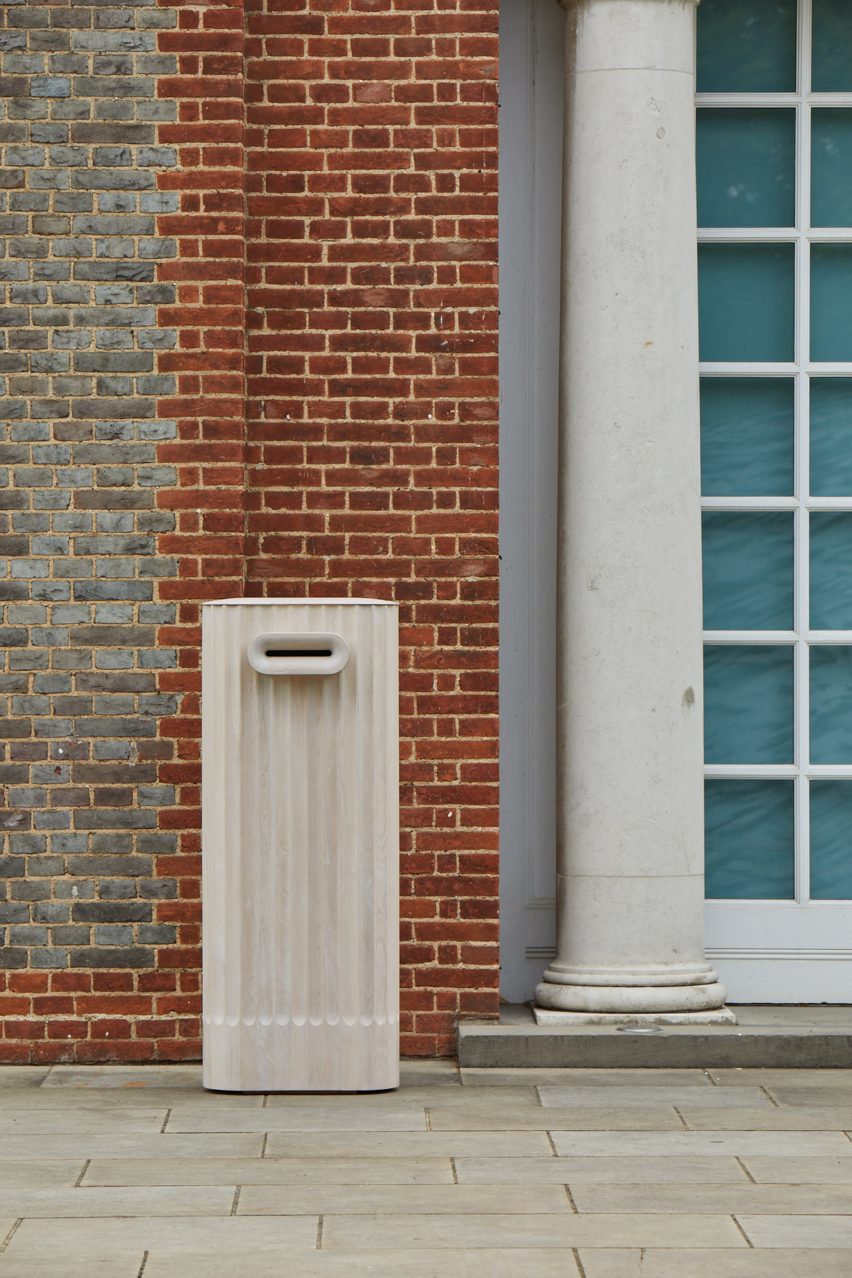 Hans Ulrich Obrist worked with Jack Mama and Nina Tholstrup of Studiomama on two fluted postboxes for the'Serpentine Galleries, where he is artistic director. The larger box will be placed outside the front door of the main gallery, with the smaller in the bookshop.

Obrist hopes it will encourage people to write letters in the digital age, as well as highlighting the important role that postcards play in contemporary art.

"We found it inspiring to think of a postbox as something that's not just a place where you post bills, but that is also about poetry and writing long hand," said Tholstrup. 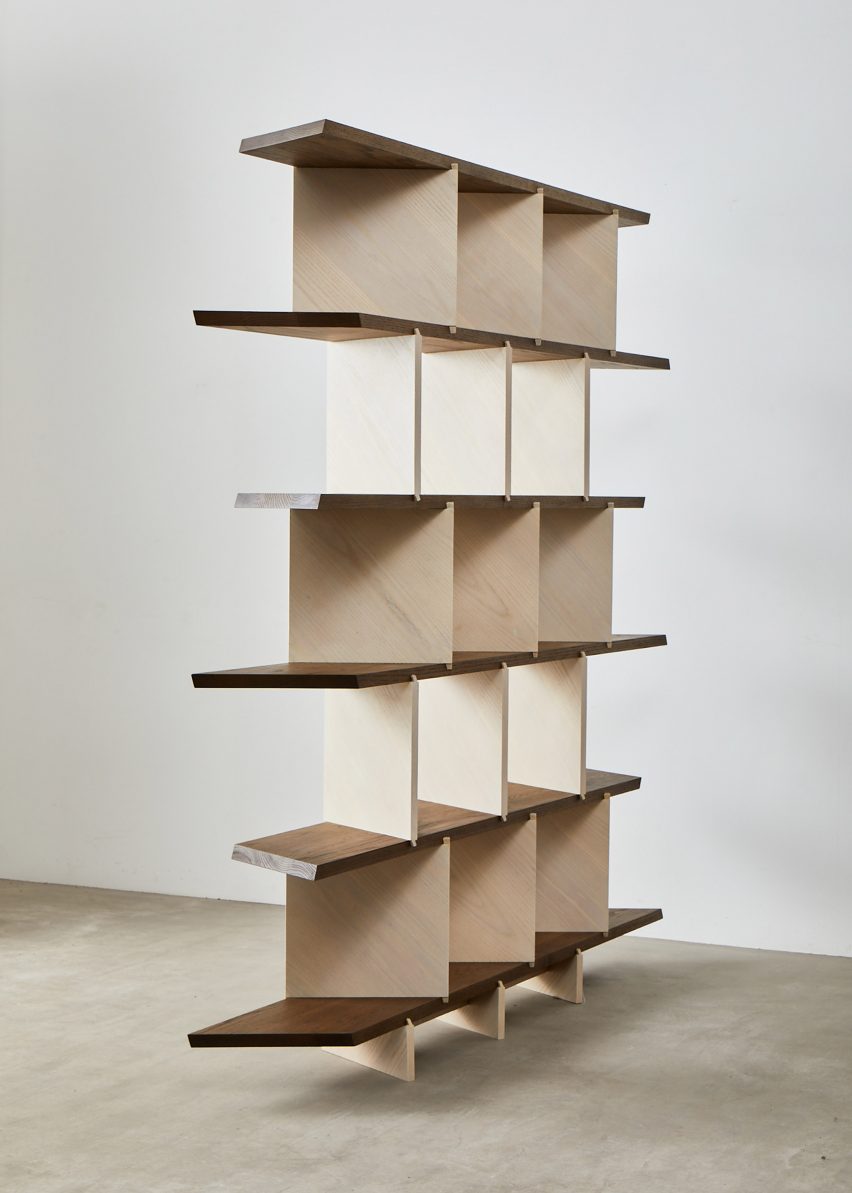 The upright elements are made from a light veneer, with darker fumed red oak on the horizontal shelves themselves. 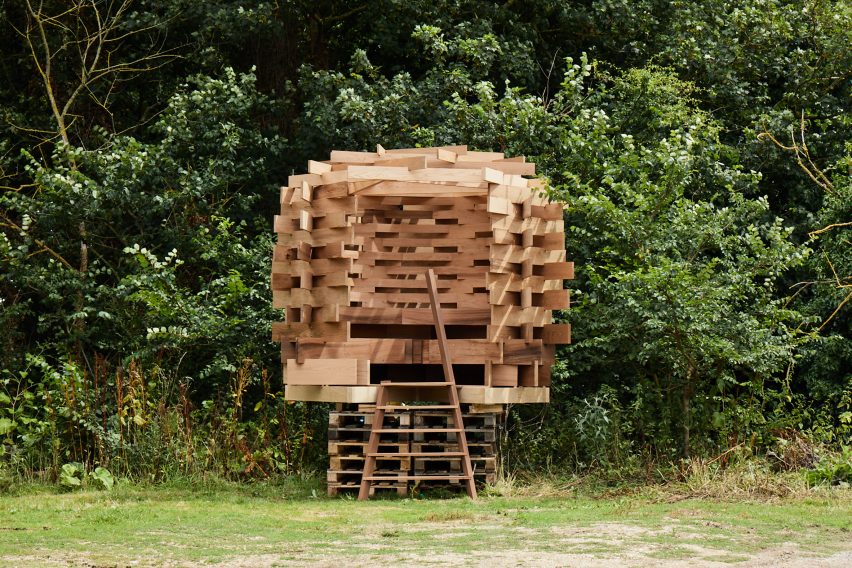 Fashioned to look like a bird's nest with interlocking horizontal slats, the seat will offer a place for quiet contemplation. The wood was thermally modified to make it suitable for a life outdoors.

"We wanted to offer the experience of something like a cocoon but at the same time allow dappled light to come through so that you get a sense that you are within the trees," said Quintero. "It's a space of contemplation and a space of reflection."

During last year's London Design Festival, a'three-storey, modular wooden maze made from cross-laminated timber was installed in the Sackler Courtyard of the V&A. The structure was made from American tulipwood.