Sheppard Robson'has unveiled the mixed-use Citicape House in London that will have the "largest'living wall'in Europe" to help improve local air quality.

Citicape House will be wrapped by a facade of 400,000 plants that are hoped to "capture over eight tonnes of carbon and produce six tonnes of oxygen" annually.

The building will be located on the UK capital's Culture Mile, a traffic-heavy area between Farringdon and Moorgate in the City of London.

It has been designed by London studio'Sheppard Robson'to replace an existing office building on the corner of Holborn Viaduct, and demonstrate how the built environment can address issues such as climate change and air pollution. 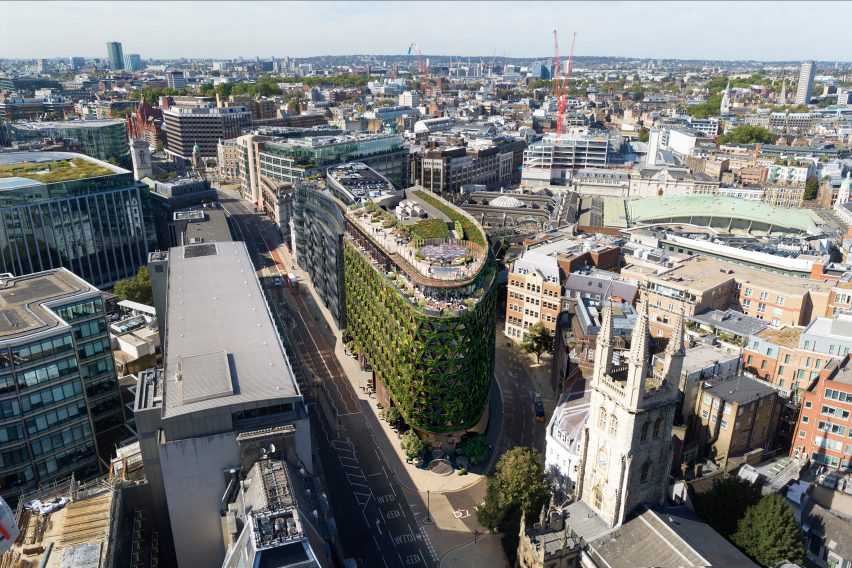 "On a site that is so prominent, there was a real drive to inject some fresh perspectives on how to grapple with some on London's most urgent environmental issues, including air quality and noise and dust pollution," said Dan Burr, partner at Sheppard Robson.

"Rather than having an isolated patch of greenery, we felt that an immersive and integrated approach would have the biggest impact on the local environmental conditions, making a better and more liveable city, as well as articulating a clear architectural statement." 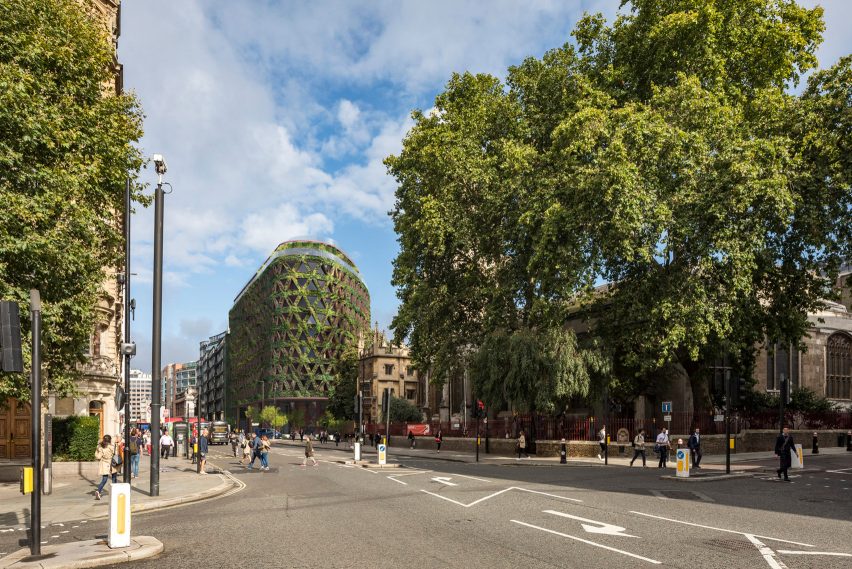 Once complete, the 11-storey Citicape House will contain a five-star hotel alongside a mix of offices, co-working and event spaces, a sky-bar, spa and ground-level restaurant.

Its size and form is informed by a pre-war building that had previously occupied the tapering corner site and "formed an elegant prow".

However, unlike the original building the ground floor will be set back from the street edge to allow a connection to a small plaza opposite the site. 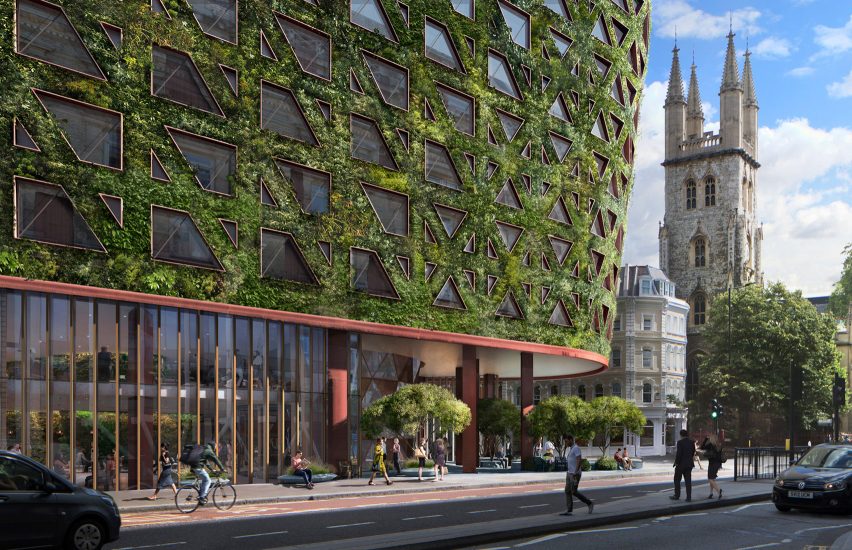 The building's green facade will align with the trusses as an external expression'of its elaborate superstructure.

This is designed by Sheppard Robson in a bid to avoid "greenwashing the building", which will require the demolition of an existing building and an inevitably complex structure to enable it to span railway lines below it.

"We are very conscious to avoid 'greenwash'," Burr told Dezeen. "The facade composition expresses the truss that sits behind it so there's an integrity to the architecture."

"We thought about how our design can positively influence the dense urban fabric of the City," he continued. "How does a building on such a tight site, hemmed in by a busy vehicular thoroughfare on one side and by hard glass and masonry buildings on all other sides, make the most meaningful green impact?" 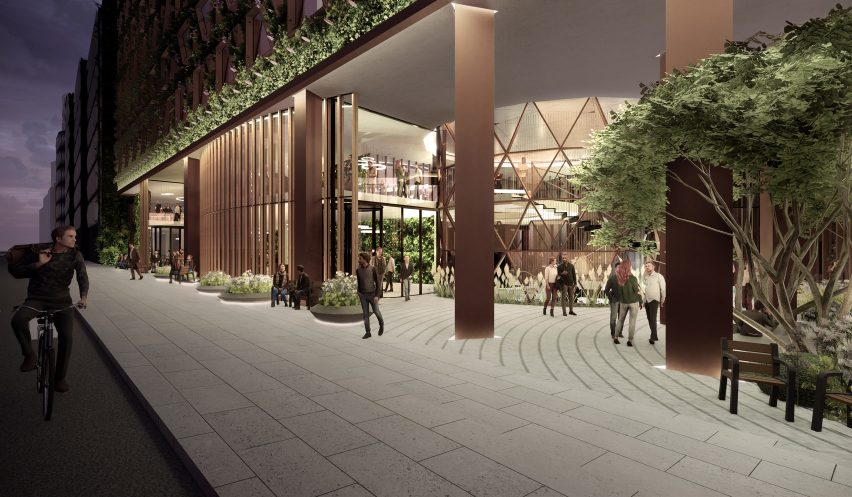 Citicape House will be complete with a publicly accessible rooftop terrace on the eleventh floor that will offer unobstructed views of the city.

This will be wrapped by the living wall, and also incorporate rooftop gardens containing threatened native wildflower species to help them flourish.

"The socially sustainable aspects are just as important to us," added Burr. "The publicly accessible spaces and a rich mix of uses allows the public to dwell into the evening and weekends, all directly adjacent to a major transport hub and following the sustainable development ethos." 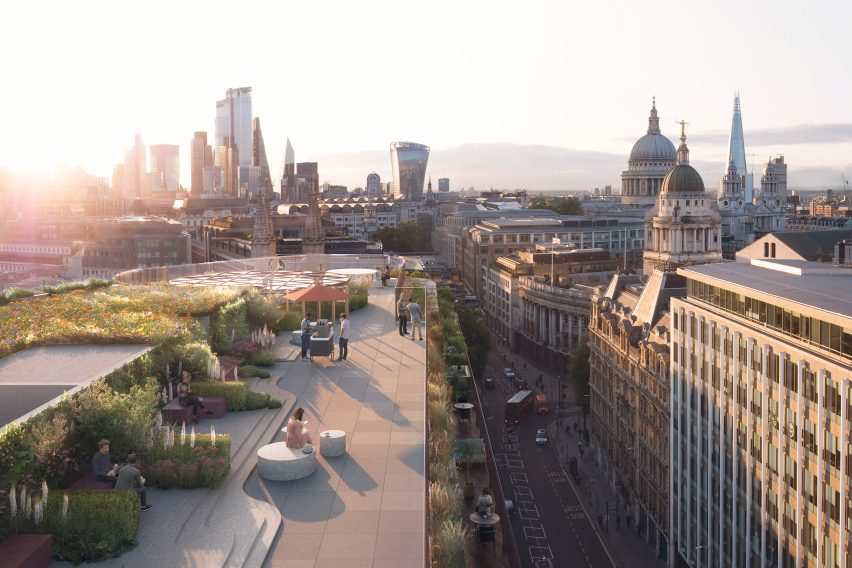 Beyond the Living Wall, the building is hoped to function as sustainably as possible, and will feature an external envelope with low U-Values and efficient glazing to minimise heat gain in the building, which will be teamed with renewable energy-sources including air-source heat-pumps.

It will also incorporate rainwater collection to irrigate the green wall and reduce stress on the site's existing infrastructure. 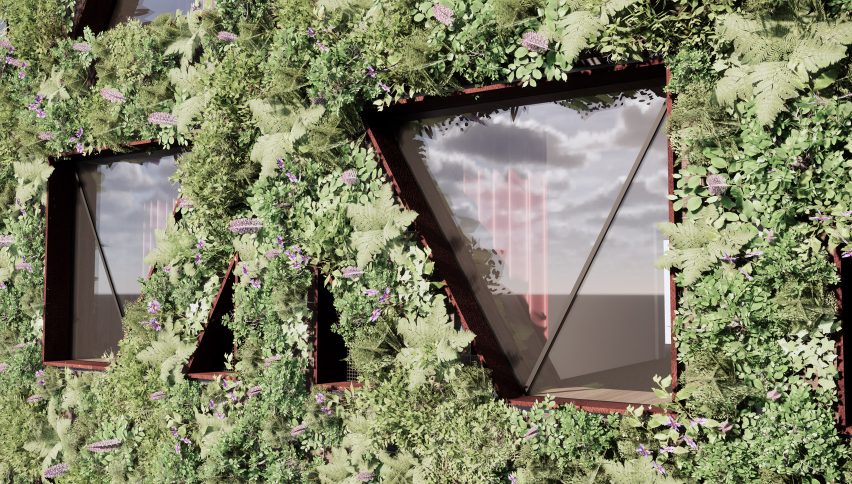 British architecture studio Sheppard Robson was founded by Richard Herbert Sheppard in 1938. It has studios in London, Manchester and Glasgow.