Foggo Associates completes Can of Ham alongside the Gherkin

Foggo Associates has designed a curved'high-rise'in central'London'at 70 St Mary Axe, which is widely known as the Can of Ham due to its distinctive shape.

The'21-storey tower stands on the same street as the'Foster + Partners-designed skyscraper at 30'St Mary Axe, which is called the Gherkin, in a grouping of high-rises in the'City of London. 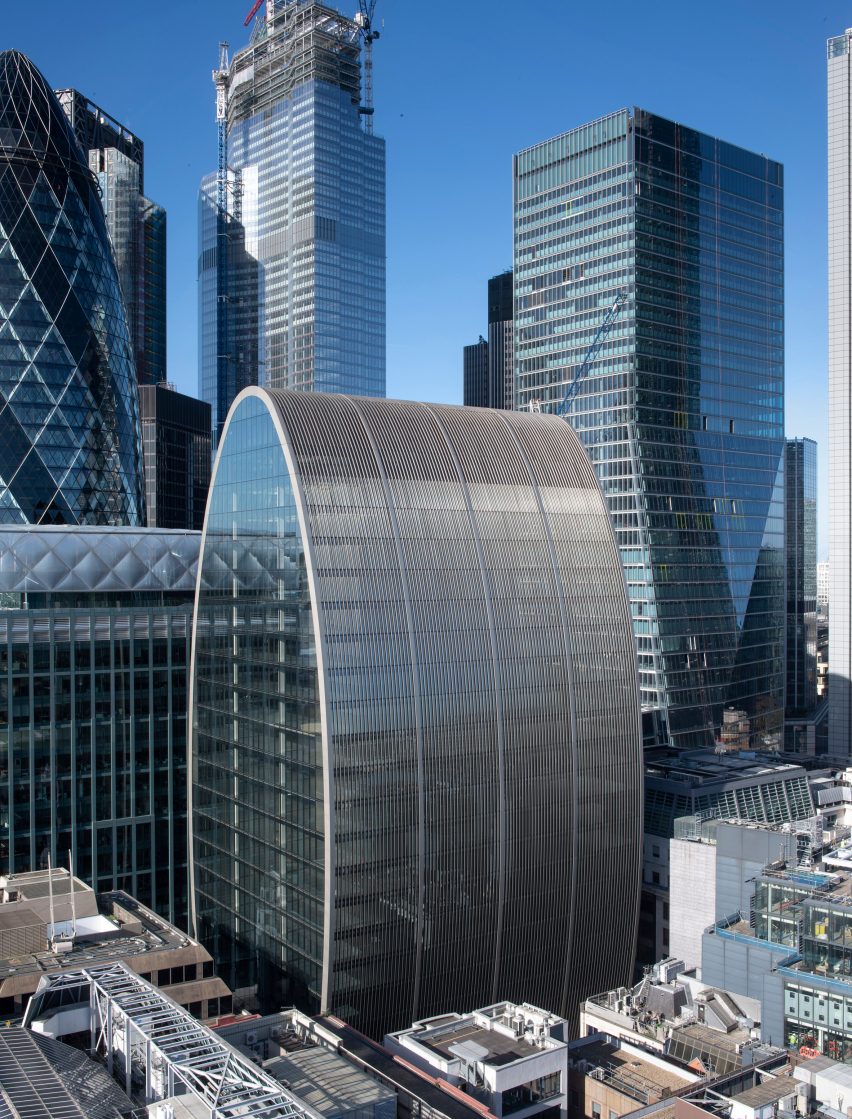 Officially named 70 St Mary Axe, the 90-metre-tall block contains 28,000 square metres of office space on its upper 20 floors above 430 square-metres of shops on the first, ground and basement level

The building has an arched profile, with two, curved facades and flat ends creating a distinctive shape that resembles the shape of tins of ham ' from which it gets its nickname. 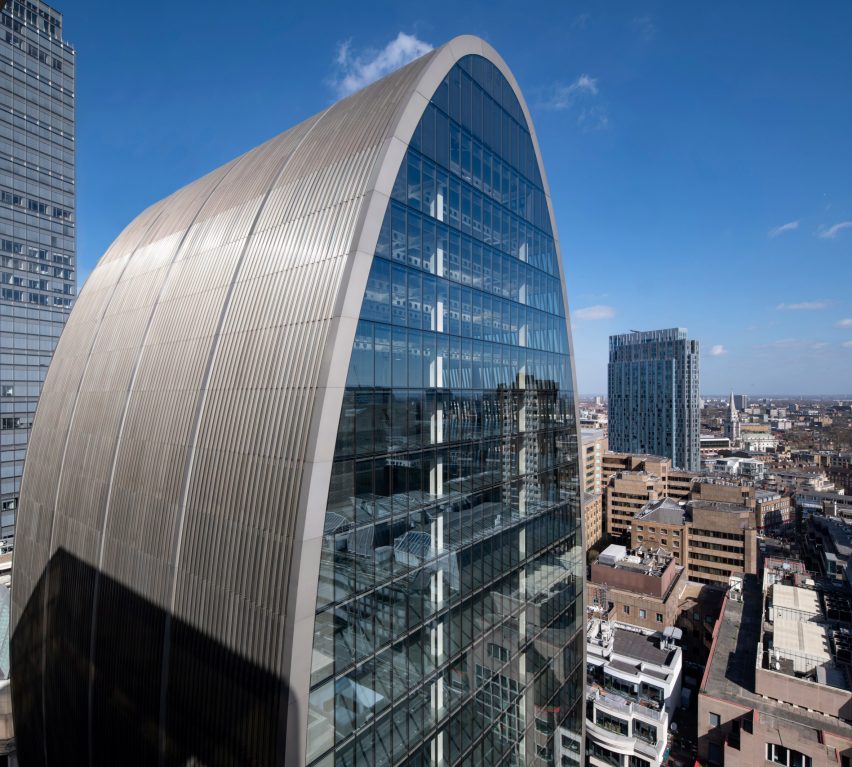 "It could be argued that it is a mark of its iconic nature as other buildings of such recognisable form all seem to gain nicknames," said'David Warrender, director at'Foggo Associates.

"We will take it as a compliment," he told Dezeen. 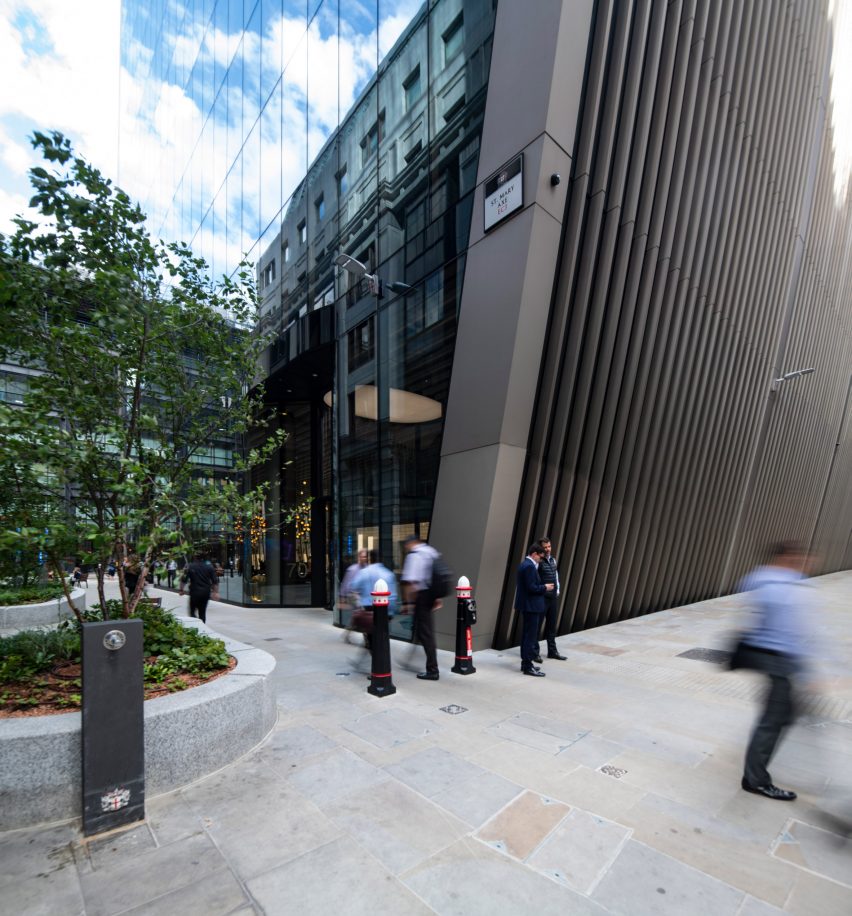 70 St Mary Axe's unusual form was the result of Foggo Associates'wanting to reduce the building's footprint at street level, while creating standard-shaped floors for use as offices.

"We wanted to give back space to the public realm around the base of the building and for the building to appear less sheer on the principal elevations on Bevis Marks and Houndsditch," explained Warrender.

"There is a misconception that the building is a funny shape and therefore must have odd shaped floorplates, when in fact, the scheme is a classic central core building where every floor is a perfect rectangle, albeit of varying sizes." 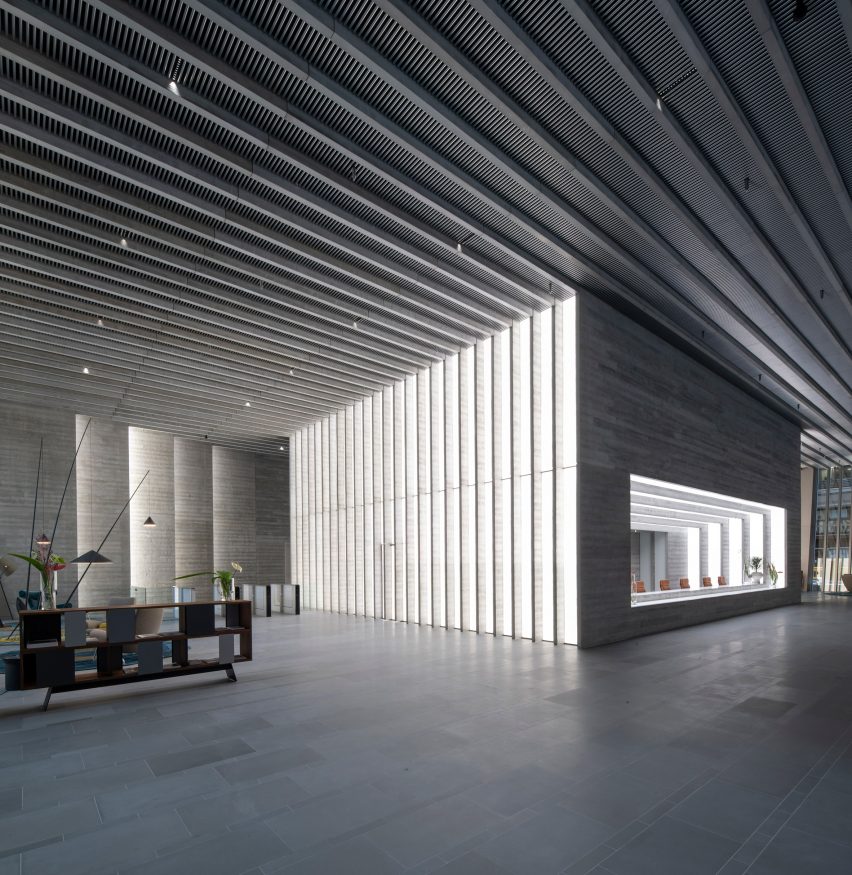 The building is entirely clad in glass with a series of light-bronze-coloured anodised aluminium fins that run up the curved facades and wrap over the top of the building.

At the top of the tower the glass panels are replaced with a mesh to give the appearance of a continuing surface and hide the building's plant ' its cooling and heating units and two generators.

"We worked very hard with our Italian cladding contractor, Focchi, to develop a perforated mesh panel which has the appearance of glass between the cladding fins which wrap over the top of the building to screen the plant and equipment which is up there by necessity."

The building is topped with'two retractable doors that can open'to allow the'window cleaning crane to emerge when needed.

On the ground floor the building has a double-height entrance atrium, which has a concrete reception-desk set at its centre.

Walls in the reception area have been made from individually hand-poured, board-marked concrete panels, which are also used throughout the building's circulation spaces and toilets.

The building's basement contains 360 bicycle parking-spaces, along with 35 shower units, that have helped the development achieve a WELL Being Standard wellness rating of Gold.

70 St Mary Axe is the latest high-rise to be built in the City of London. It stands near the site of the proposed The'Tulip, a 305.3-metre-high viewing tower designed by Foster + Partners.'

Photography is by James Reid.