Hopkins House was designed by Michael and Patty Hopkins as their own home. We take a look at the lightweight steel and glass house as part of our series on'high-tech architecture.

Completed in 1976 in the north London suburb of'Hampstead, Hopkins House was the first project designed by the husband-and-wife team that run'Hopkins Architects.

The two-storey, lightweight steel and glass structure was built as the Hopkins' family home and as the office of their own architecture studio, which they established the same year the house was completed.

More than 50 years later Michael and Patty Hopkins still live in the home, while the office of'Hopkins Architects'was based in the building for eight years until it outgrew the space and moved to a building in Marylebone. 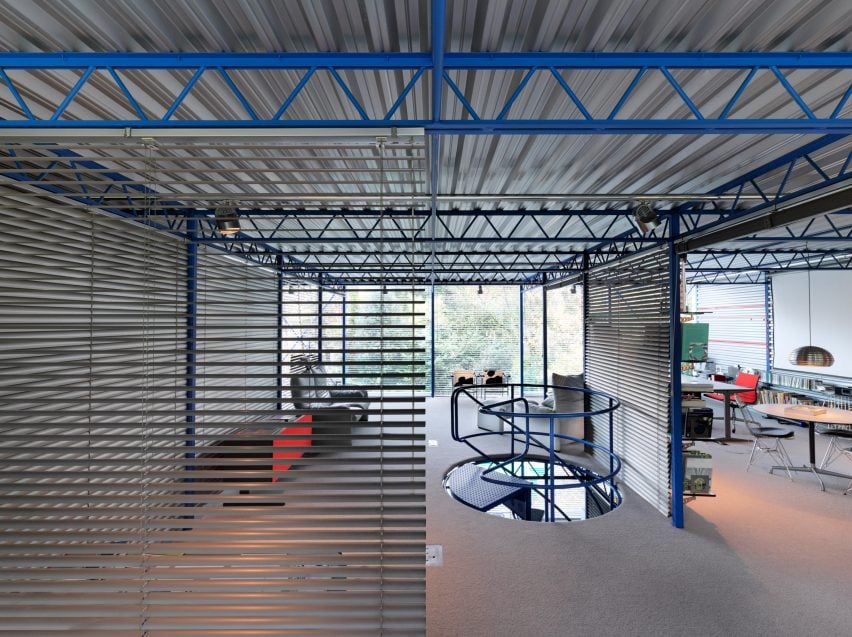 The house was the first project the architects designed together, with Patty previously running her own small practice. Michael had worked for eight years at Foster Associates, where he was the partner responsible for the IBM Pilot Head Office in Cosham and the Willis Faber & Dumas office building in Ipswich.

As their own home, the practice's first project and its office, the building was used as a calling card for the recently established studio's philosophy. 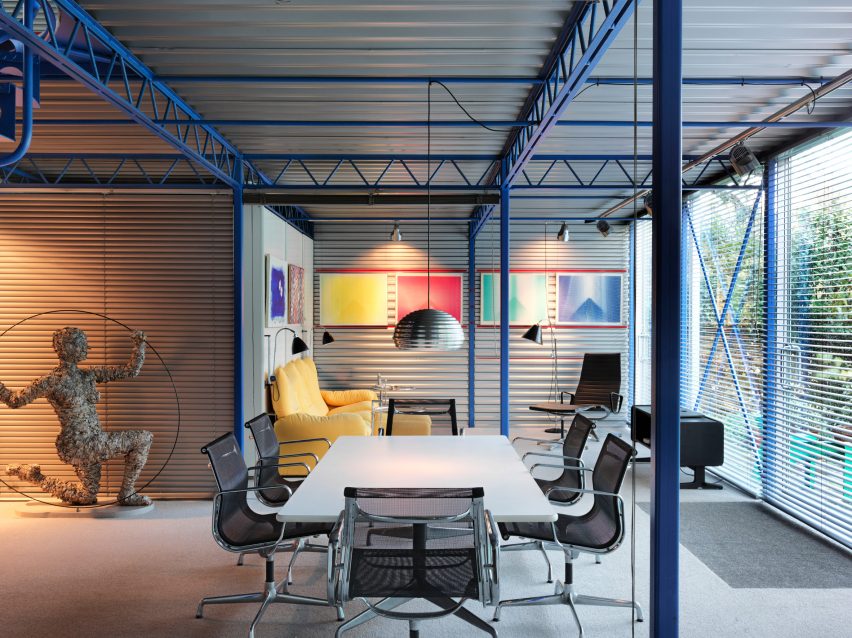 Built amongst the Victorian mansions and Regency villas of Hampstead the two-storey home, which was influenced by the'Eames Case Study House No. 8'of 1949, is made almost entirely out of tubular steel, with glass walls.

The two-storey house is sat below the street level, so from the road it appears as a single-storey building, which is accessed across a drawbridge. 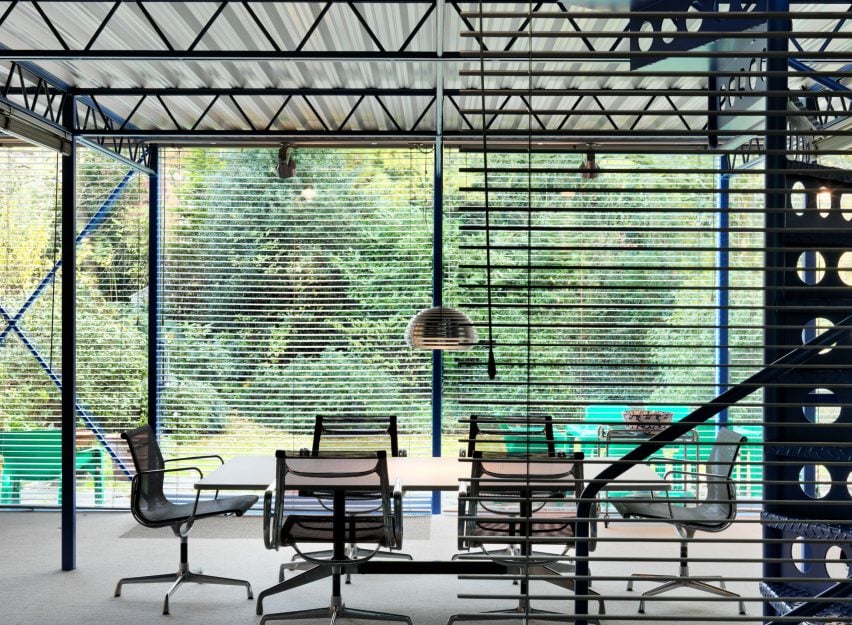 The house's minimal structure was designed by Anthony Hunt, the engineer of many of the early high-tech buildings, including Team 4's'Reliance Controls factory, Norman Foster's'Sainsbury Centre for Visual Arts'and the Willis Faber & Dumas headquarters.

At the Hopkins House the techniques that had been developed at larger commercial buildings were refined for the smaller house.

The structure of the 10-metre by 12-metre rectangular house is made from thin, steel columns and latticed steel-trusses that are visible throughout the house and painted blue. These structural elements standout against the grey, troughed metal sheets that make up the house's walls and roof. 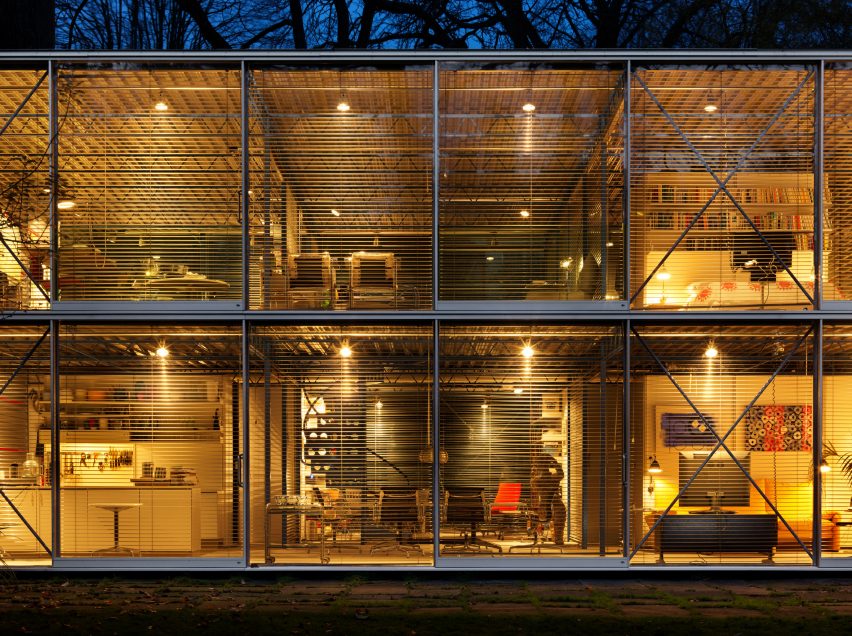 Like many high-tech buildings, the home was designed to be open and flexible and has few permanent internal divisions, instead the spaces are divided by venetian blinds that hang between the internal columns.

All of the spaces share the same minimal aesthetic with no distinction made between the offices areas and the family's living spaces.

The studio's office was situated on the upper floor of the house, as well as the master bedroom, which overlooks the garden.

A blue spiral staircase leads down to the ground floor where the kitchen and living areas are on either side of the dining room, on the house's garden side. Three further bedrooms are lined up on the street side of the house. 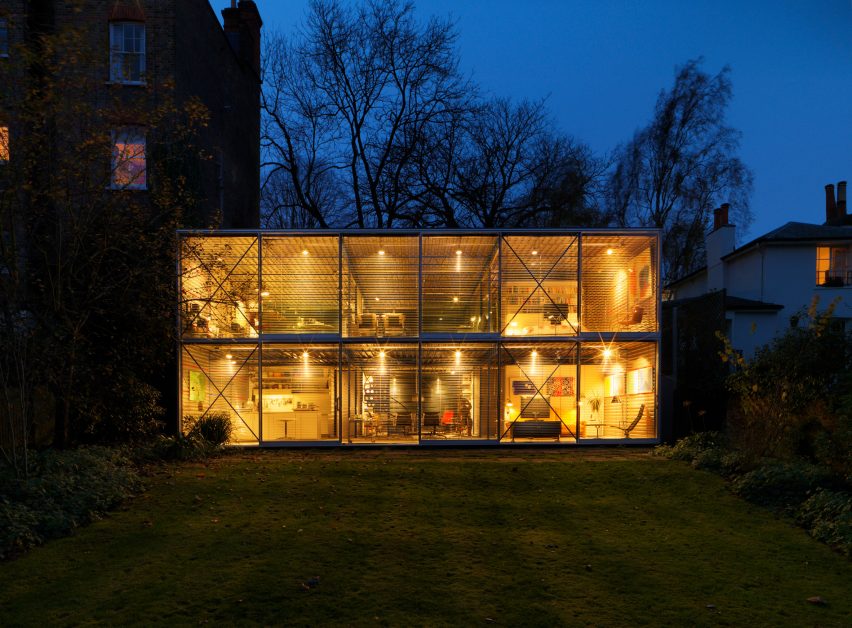 When it was complete, the house won a RIBA award in 1977. It was given a grade-II* listing ' for particularly important buildings of more than special interest ' in 2018 with Duncan Wilson, chief executive of Historic England, stating that the building was an "elegant piece of post-war architecture".

"The architects behind this innovative building showed the world what could be achieved within the confines of a restricted site and on a modest budget, and in this experimental work managed to design a combined home and office space that has stood the test of time and inspired other architects," Wilson continued.

Led by architects'Norman Foster,'Richard Rogers,'Nicholas Grimshaw, Michael and Patty Hopkins and'Renzo Piano, high-tech architecture was the last major style of the 20th century and one of its most influential.