Transport for London (TfL) and Notting Hill Genesis, working together as part of the Kidbrooke Partnership LLP joint venture, have been given planning permission to build eight blocks of flats in Kidrooke, southeast London.

Approval follows the decision by deputy mayor Jules Pipe to call in the application and act as the local planning authority.

The Kidbrooke Station Square development, designed by Glenn Howells Architects, will be built on a vacant four-acre site in the Royal Borough of Greenwich. There will be 619 flats across the eight buildings, with roughly half of them designated for shared ownership or 'affordable' rent.

The proposals include new community amenities and shops.

Network Rail currently owns a quarter of the site and has granted a long leasehold interest to enable this land to be used by the joint venture to facilitate an improved transport hub.

The site was previously part of an RAF base and was then used as operational land during the construction of the A2. It has since been largely unoccupied, apart from Henley Cross bus stop.

John Hughes, group director of development at Notting Hill Genesis, said: 'Our vision is to create a high-quality, mixed-use development which completes the new local centre at Kidbrooke and contributes positively to the regeneration of the area for the benefit of the whole community.'

Graeme Craig, director of commercial development at TfL, added that the development would also generate revenue to reinvest into the transport network. 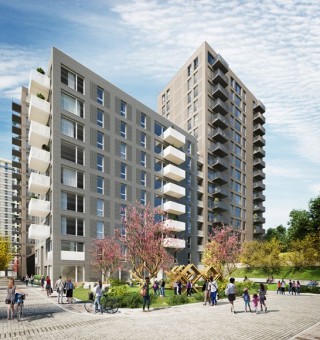