The Mayor of London has revealed the FE projects that will share '57.6 million

Seventeen providers, nine of which are colleges, will benefit from funding of between '150,000 and '10 million.

The Greater London Authority said applicants have committed '181 million in match funding from other sources, taking the total value of these projects to '239 million.

Areas to be focused on include construction and digital skills, as well as training those with special educational needs and disabilities.

The Mayor of London, Sadiq Khan, said: 'Ensuring Londoners have the skills and training to thrive in our dynamic economy is crucial for the future of our city.

'This funding will create high-quality facilities and training programmes, working in partnership with businesses to establish a pipeline of talent for employers both now and in the future.'

One of the beneficiaries in this round was London South East Colleges, which received '10 million for its Future Greenwich and Greenwich Digital Village project.

Principal Sam Parrett said: 'This investment is greatly needed since we took on the management of the former Greenwich Community College in Greenwich in 2016.'

She added that the funding will be matched by the college's own funds, to enable the construction of a new '24 million campus.

Harrow College and Uxbridge College, which merged in August 2017, has been allocated '5,330,520 for its Digital and Skills for Work Academy, with deputy principal Pat Carvalho saying: 'This latest funding for our Harrow-on-the-Hill campus will be vital in transforming our learner services, digital, media and English as a second language provision.'

The Mayor of London is'due to take control'of the city's '306 million adult education budget in August. 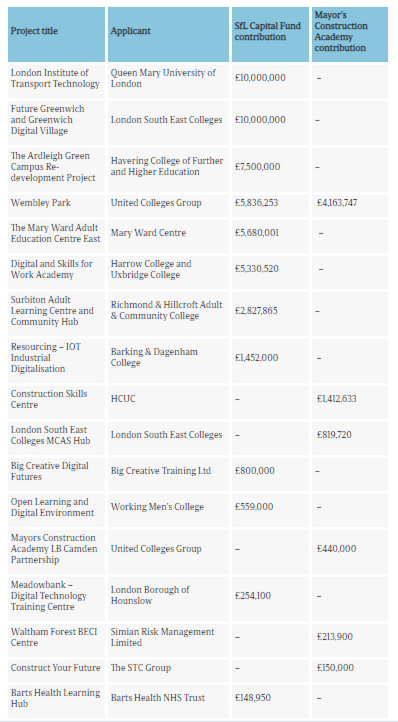