What will it take to make buildings carbon neutral?

Last month, 19 cities signed a declaration to make all new buildings carbon neutral by 2030. So what happens next?

If cities are going to curb the rise of global temperatures to less than 2 degrees Celsius, they'll have to address the single largest contributor, by sector, to their carbon footprint: buildings. Buildings account for roughly'50 percent'of a city's total carbon emissions, and 70 percent in major cities like London, Los Angeles, and Paris.

The ultimate goal,'as'laid out'by the World Green Building Council at COP 21 in Paris in 2015, is that by 2050'when 68 percent of the world's population is projected to live in urban areas'all buildings will only use as much energy as they generate. And to get there, a group of large cities is first tackling a closer target. Last month,'the mayors of 19 cities'including New York, London, Tokyo, and Johannesburg'declared that they will enact policies and regulations that will make all new buildings carbon neutral by 2030.

The bad news is that the larger challenge is to make existing, not new, buildings more efficient. Buildings that already exist today are estimated to account for'65 percent'of all buildings in Organization for Economic Co-operation and Development countries come 2060.

Even so, changing how new buildings are built has major implications for the future. And fortunately, raising standards for new buildings'compared to retrofitting older ones'is the lower-hanging fruit. 'New construction is potentially much easier, since you're starting from scratch,' said Ralph DiNola, CEO of the New Buildings Institute, a nonprofit that advocates for better energy performance in buildings. Not that there won't be any challenges, DiNola added, but carbon neutrality 'is a good and realistic goal as long as we are clear about what that requires for the buildings.'

To reach net-zero carbon, DiNola said, the energy usage of buildings will have to be cut anywhere from 50 to 85 percent.

For starters, cities need to have in place a climate action plan; robust building codes that keep up with energy-efficient technology and design; and energy-intensity targets that will guide buildings toward zero carbon emissions, said DiNola. The New Buildings Institute works with New York and other cities'to develop 'stretch codes''an extra layer of local, more stringent regulations on top of the base building codes, which focus specifically on energy efficiency. Cities also need to set up a system of rewards and penalties, and give builders and developers enough time to comply.

To reach net-zero carbon, DiNola said, the energy usage of buildings will have to be cut anywhere from 50 to 85 percent'and that means addressing the main energy hogs. 'Heating, cooling, hot water, and lighting are the primary loads in most buildings,' according to Maureen Guttman, an architect and green-building expert at the Alliance to Save Energy. On average, those loads account for 75 percent of the energy consumed in the U.S. building sector, and'40 to 50 percent'of total energy demand (not just in buildings) in the world.

As I'reported'last year when New York City announced a mandate to make all its existing buildings greener, features like higher-efficiency heating and lighting systems help. It isn't a matter of finding new technology, Guttman said'rather, it boils down to designing a good building envelope to avoid heat gain over the warmer seasons and heat loss during the cold. That means good insulation in everything from the walls to the floor to the ceiling and eliminating air leakage (which,'by one estimate, can account for at least 25 percent of heating load), as well as an effective ventilation system. It also means windows that reduce heat intake, or 'cool' roofs that'reflect sunlightinstead of absorbing its heat.

Asked whether the 19 cities will reach the 2030 goal, Guttman said there's no question they can. 'Zero [carbon] buildings are being built without sophisticated materials or sophisticated equipment,' she added. 'We have the technology.' 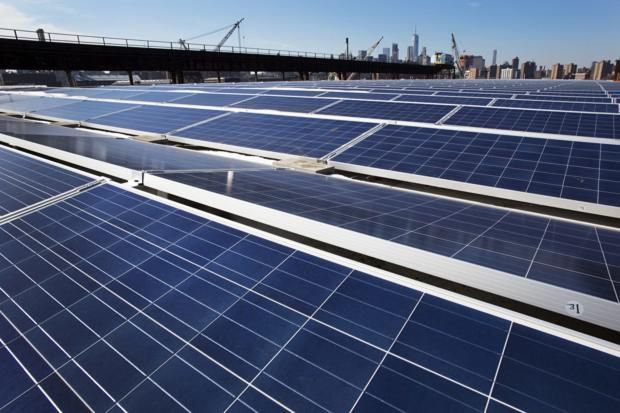 One example is Melbourne's'Pixel Building'(the first carbon-neutral building in Australia), which opened in 2011. Colorful panels control the amount of light coming into the building, and 'smart' windows allow heat to escape on summer nights while filtering in fresh air. Solar panels and wind turbines sit on the rooftop, generating renewable power. Canada's first carbon-neutral building is now under construction'set to open later this year in Waterloo'and will include solar walls as well as a three-story green wall to offset carbon emissions.'Both buildings incorporate many of the basic elements that Guttman describes.

Solar and wind energy are promising alternatives to fossil fuels, but generating a lot of them requires ample land space that cities don't have. (Solar panels atop tall, skinny buildings can only go so far.) The group of 19 cities that signed the carbon-neutral pledge includes some of world's largest and most populated cities. 'That means that they have dense urban infrastructure,' said DiNola. 'So they would have to have a way for owners to use renewable energy that is generated off-site, rather than requiring on-site renewable energy generation.'

So where can cities get their renewable energy? Utility-scale solar'could remake the world's energy supply'by 2050. If that's not fast enough, a'2016 report'from Energy Cities, a coalition of local authorities focused on energy transition in the European Union, recommended that officials create partnerships between city centers and their surrounding rural communities. The authors call it a win-win: Urban centers need energy and may be willing to provide financial or technical support to rural communities, and those communities have land for, say, wind farms and solar arrays, but not necessarily the funding and research to develop them.

If cities are serious, 'everybody needs to do things differently than the way we do them now,' Guttman said.

In Washington, D.C., for example, three universities inside the city'Georgetown, George Washington, and American'have collaborated on a project to supply half of their combined energy needs from'a solar farm'in North Carolina. This kind of partnership, when scaled up, could address the density challenge that DiNola describes and curb the carbon footprint of not just a few buildings but potentially an entire city.

Instead of technology, what cities need is training'so designers and builders know how to erect green buildings, so tenants and operators can ensure that buildings actually function at high efficiency, and so codes are enforced, and the city's agenda is carried out. But perhaps most of all, Guttman noted, they need political will.'Cities that want greener buildings will likely face a political backlash'especially in the U.S., where regulation has always been a subject of contentious debate.