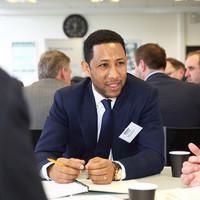 Originally from Eritrea, Isayas studied Building Construction in Asmara Technical School awarded Distinction and received full Scholarship to study Civil Engineering in Durban, South Africa. Lived for 4 years in Durban and achieved BEng Structures from Durban University of Technology with Merit from the whole faculty of Engineering. Prior to completing his degree he received a graduate engineer role with BAM Nuttall (Formerly Edmund Nuttall), then relocated to United Kingdom in 2014.

Isayas worked in Liverpool on a Park+Ride Project, then transferred to Stoke-on Trent on A50 road works, prior to undertaking design secondment in Nuttall’s Head Office, Camberley. Following that he decided to join the Special Projects team that were mobilised to prepare London 2012 Olympics, worked for over 4 years to see the complete transformation of derelict area into Olympics and regeneration legacy and progressed into Site Agent.

Following Olympics, Isayas joined Morgan Sindall in 2011 to C350 Crossrail Pudding Mill Lane project which has been pivotal to his progression to current role. He has developed and led successful teams to deliver one of the most complex projects across the Crossrail family of projects, C350 Pudding Mill Lane. During the course of the project Isayas embarked on distance learning Masters MBA with Warwick Business School, which Morgan Sindall sponsored him to achieve MBA qualification in 2017. Isayas progressed on the project from Senior Agent to Project Director.

On Crossrail Isayas has proven track record of delivery, ability to build and lead teams, manage change through collaboration to improve business performance. He is an Ingenious thinker, has strong analytical and decision making skills to strategically influence business outcomes with comprehensive understanding to govern major projects throughout the project lifecycle to deliver value for money benefits to all stakeholders.

In 2018, Isayas got promoted to Sector Director, and currently manages a portfolio of TfL schemes for Morgan Sindall Infrastructure within the Rail business unit, reporting to the MD, having successfully lead/won a £200m+ project in joint venture with VolkerFitzpatrick, securing Barking Riverside Scheme in late 2018.